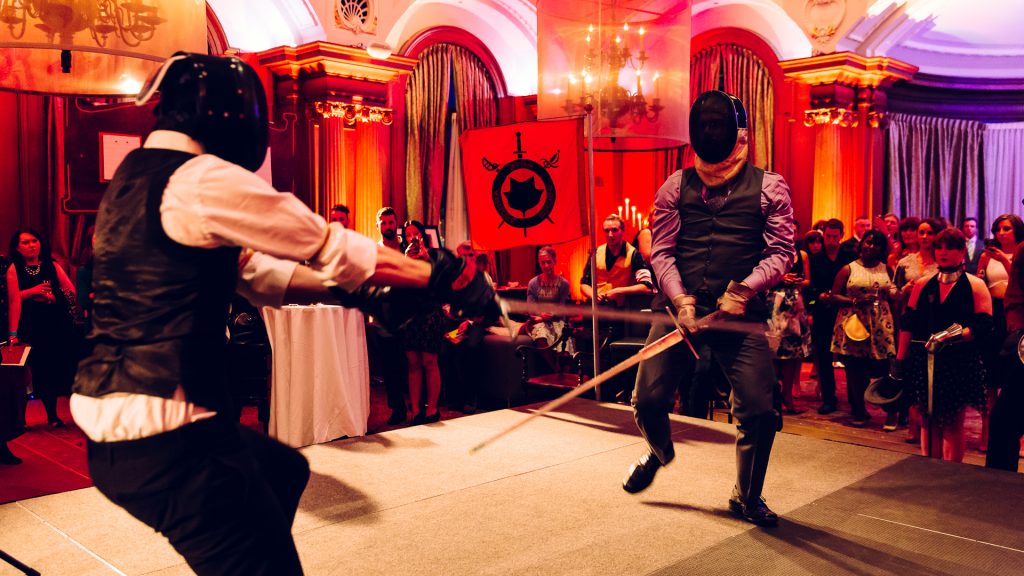 Tennis, one of the few internationally followed duelling sports, has four major tournaments throughout the year that are held in esteem above all of the others. These events, “the majors”, are hosted in four different countries and played on four different surfaces: Wimbledon (grass), French Open (clay), US Open (Decoturf), and Australian Open (Plexicushion).

Each turf has different qualities of speed and bounce and there are players who have specialized in particular types of surfaces. There are many players who only play at a single particular event and rankings of players at each tournament are based on their historical performance on that surface. To win all four tournaments, and thus show that you are capable of a world class player on all four surfaces, is one of the most sought-after goals of the sport and is referred to as winning a Grand Slam.

Tournaments in HEMA (Historical European Martial Arts) are one of the ways that people seek to challenge themselves and test their martial skills against others. One of the big problems always being wrestled with is how do you maintain as much martial authenticity as possible within the sporting environment of a tournament?

Sport rules come into play to protect the safety of the fighters from certain types of techniques (like restricting certain types of grapples or throws) or to focus fighting in a particular direction that is seen as more correct or authentic to the discipline (emphasis on sword work, or striking to the body, or cutting over thrusting, or vice versa).

The challenge is that any rule you put in place is going to intentionally or unintentionally open up the system for gaming and lead to a focusing of techniques toward those that will score the most points. Even without intentional gaming, rules, points, and judging shape the art, and that tends to be away from its martial applications and toward a very focused sport form that lends itself to particular types of bodies, particular types of techniques, particular types of weapon design, and particular strategies, many of which are often seen as inauthentic. A few examples of sport-ification include focusing on striking targets that are most visible to judges or make the most noise (more easily heard by judges), or making a target like the hands invulnerable and thus de-emphasizing the need to protect them and punishing those who don’t have the reach to get to deeper targets as easily.

There are many different formats appearing here and there, each attempting to solve one problem or another while at the same time pushing toward a desire to find a single unified format that is both appealing for competition, easily judged, reasonably safe, AND martially authentic.

Many believe there is a holy grail that can be achieved, an ideal of martial validity, and that’s the fool’s errand.

A quality of many “real world” martial arts is their capacity to be applied in the diversity of contexts and “rules” that occur in the real world, all to achieve particular aims (killing, subduing, escape, etc.). The rules of the real world are often implicit but they create technical and tactical constraints and priorities none the less. Whether it’s that you’re fighting in a narrow alleyway, or you’re defending yourself in a time and place where deadly force would be illegal or impolitic, you must strategically and tactically adapt your art to the environment. The more capable the martial artist the more adaptable their art.

The fact that a tournament format restricts the techniques you can apply and requires particularly focused strategies is not what can take them away from “real world” authenticity. It is the pursuit of a single unifying environment—and the evolution of martial arts to be applied only to that environment—that moves the art toward the sport.

So back to tennis. Though tennis is now highly standardized from its very diverse roots it still maintains the diversity of playing surfaces, and that creates room for some diversity of play and thus the requirement for strategic and technical adaptability. It’s definitely still a focused sport but there is some inspiration here I believe is useful for HEMA.

So imagine if instead of seeking a single unifying set of rules, we instead purposefully aligned around 4 or 5 rule sets. Each emphasized and prioritized different qualities of martial art. There could be one that emphasizes scoring of certain techniques, another that allows grappling or even requires it, another that disallows grappling and hits to the hands, one that is based on continuous fighting, etc.

Yes, these different rule sets exist currently but largely the groups using them are still putting them out there with the goal of finding the one ultimate rule set to eclipse all others. Instead, I suggest that groups dig into and really invest in their rule set for its own sake and vie to have their tournament (or at least their format) become one of the majors alongside purposefully different events.

Some folks might choose to really dig into one format and really own the sport-approach to those rules. And, there will be a variety of different formats to aim at based on your own preferences and physical traits. Diverse rules mean greater diversity of art and people practicing. Then others might seek to win the coveted Grand Slam and thus will need to train in a martial art that has more qualities of real world adaptability. It would have to be an art that at its core allowed for a systematic approach to a diversity of environments. This is much more in alignment with real-world martial arts goals.

It would be interesting to see tournaments that restricted environment (like the alleyway I mentioned) or allowed diverse disciplines (mixed weapons) or multiple opponents or required less armour and a lighter touch or didn’t involve scoring points at all (we run a Martial Challenge event that has a tournament like this, and Longpoint might be going in this same direction). The sky is the limit for the contexts we could explore.

It’s not that these types of events don’t exist. There’s everything from the melees of Armoured Combat League to the continuous fighting format that occurred at Swordsquatch earlier this month. What I’m advocating for is a change of emphasis to one of diversity as opposed to conformity to truly test our martial arts.

Instead of trying to find an advocate for one format as being the best or most authentic format, we need to realize that authenticity may only be realized by having as many different environments to play in as possible.