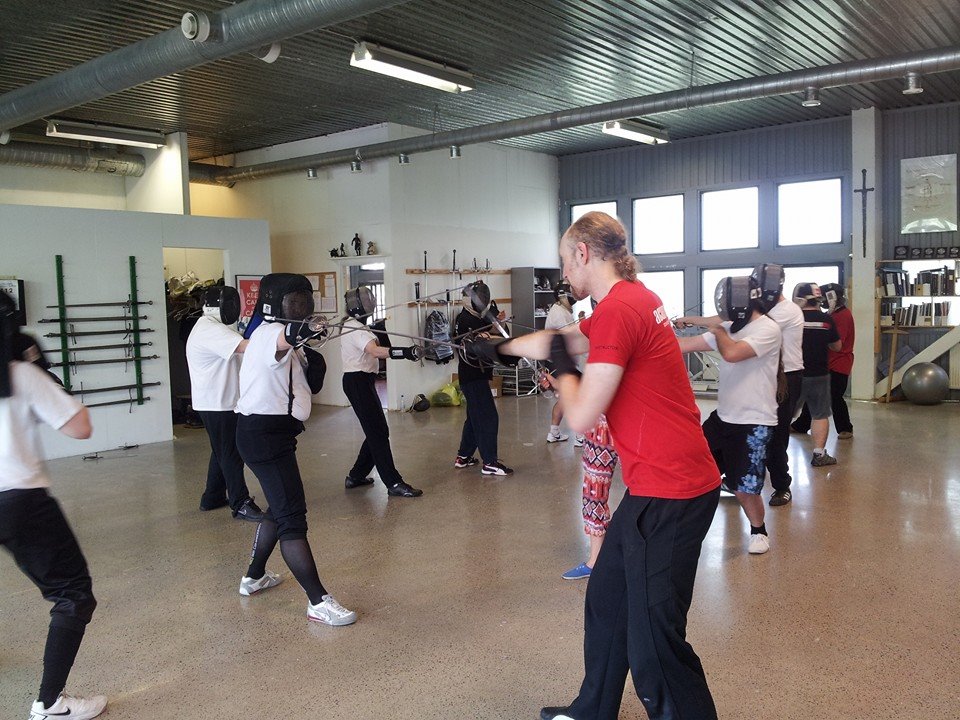 This past weekend I was in Helsinki Finland visiting Guy Windsor’s School of European Swordsmanship. It was the last stop on my teaching tour of Europe and a very nice place to make my last major visit before coming home.

On Saturday both Guy and I travelled to Tampere, about 2-hours North of Helsinki for a yearly gathering of martial artists from the Finnish Martial Arts Forum called Potku (the Finnish word for Kick). This year the gathering was focused on HEMA and hosted about 30 practitioners from groups from throughout the country. Each of us taught workshops on Fiore’s system of Dagger. It was a spontaneous development, going into the event neither of us had any idea of what we would teach, largely because of not having much information on the availability of equipment or experience of the participants. The day started with Peter, a gentleman from Helsinki teaching unarmed dagger defence from a German system. This lead to the inspiration for Guy, and then for me, to build from those dagger defences into Fiore’s decision tree (Guy) and then into that same tree applied to dagger versus dagger (my session). It was an enjoyable progression and I always like the challenge of delivering content on the fly that complements student needs and the topics of the other instructors.

On Sunday I delivered a workshop on Italian Rapier and Rapier & Dagger at Guy’s school in Helsinki. We had a good turnout of about 19 students (even with a few last minute cancellations) and a fun thing was that 3 of them were from Academie Duello in Vancouver (having, in a manner of speaking, followed me to Finland). There were also students from Russia, Guernsey (an island country near England) and the northern reaches of Finland.

The workshop began with a look at fundamental body mechanics for Italian Rapier and then built into the finer parts of controlling the opponent’s weapon and setting them up into strategic pitfalls. At the end we picked up rapiers and daggers and went through the core postures and built into three essential “plays” that used these postures to strike the opponent after they’d been lured into error.

Everyone seemed to thoroughly enjoy the workshop and I was very happy that both new and experienced students were attentive and engaged. I could tell that Guy focuses a lot on body mechanics in his school as you can really see it in his senior students who move fluidly and in a relaxed manner. They are also prepared for a lot of higher level theoretical content, which is always a pleasure as a teacher.

I was treated very well by Guy and his students and also enjoyed visiting a class that Guy taught on Monday night and listening in on a private session on Tuesday morning. It’s always a pleasure to watch other professional instructors teach and to get a sense of how they run their classes and approach teaching and coaching. Guy is very effective in both regards and I certainly had my own take-aways from the workshop weekend as well.

Guy should be very proud of his school. I was certainly proud to be invited to teach and visit. Thanks again to Guy, his family, and his students for being such fine hosts.