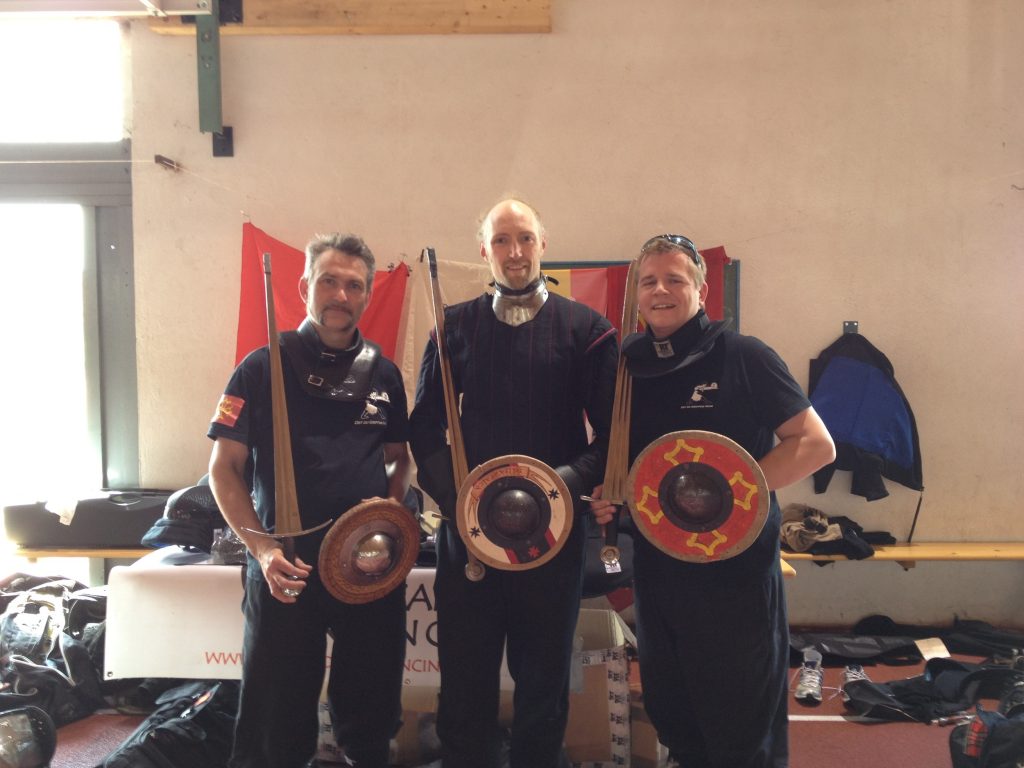 A weekend ago I attended the HEMA gathering in Dijon, France. This is one of the oldest events in Europe and has grown from a small gathering of friends to a very large gathering of friends. This was my first time being at the event and it was a pleasure being there as an instructor and participant.

The event is rather chaotic, which I understand is part of its charm. The schedule wasn’t posted until the night before it began, which meant that most people never saw the workshop descriptions (there’s no printed or posted long program, just a schedule on the board at the main hall). I took this in stride, but it was rather frustrating to hear later on the weekend from several people that they thought my workshop “Applied Combatives” was a boxing workshop and would have attended had they known it’s real topic. With no description to read it makes it harder to make choices.

That being said my workshop went well and a lot of people told me it was a highlight for their weekend, which was nice to hear.

I took several workshops myself with highlights including:

1. A workshop on wrestling at the sword delivered by Ingulf Kohlweiss. Ingulf has a very systematic and thoughtful approach to delivering a class where each exercise builds on the one before. I thought what he delivered was immediately applicable and useful to studies at Duello and could be applied easily in our classes as well which is super.

2. Gilles Martinez delivered a workshop on Fiore’s longsword. Some of his interpretations differed from mine and I really enjoyed the discussions we had afterward. I’m looking forward to further collaborations even if I have to use broken french to have them. Definitely a gentleman worth meeting if you are in Nice, France.

3. The French Wrestling workshop I took on the morning of the first day was great. The instructors Chloe and Vivien gave a very thorough and physical view into a classical wrestling system that was a great start to the weekend.

Each night of Dijon has a gathering at a local pub. These events gave a great opportunity to meet different people from around Europe and have both informative and frivolous discussions. There was also lots of opportunity to fence during the days and I enjoyed sparring at longsword, rapier, and sword and buckler. Some highlights in this regard:

1. The passion of the Spaniards. There was a fantastic crowd of Spanish students from 4 or 5 different groups in Spain. I was very much inspired by how much these guys love to fence and learn. My dance card was very full!

2. Doing sword and buckler with the Toulouse fencers. Anthony and Roland (in the picture) from l’Ost du Griffon Noir were a pleasure to meet (they sought me out on my first night there thanks to Roland Warzecha who told them to find me). I got to cross blades with them on a few occasions over the weekend and very much enjoyed it.

3. Longsword fencing with Ingulf, Thomas, and Frederic. Definitely a great start to my Saturday. Then doing a bunch of rapier with my friends from Austria.

In spite of the Chaos and a few challenges with tournament organization and such, the event really did come together well and showed me how often all you need to do is bring great people together into the same place and let magic happen.

Overall an excellent time and I would not hesitate to come back. Thanks Fabrice and de Taille et d’Estoc for hosting the event and for having me as a part of it this year.