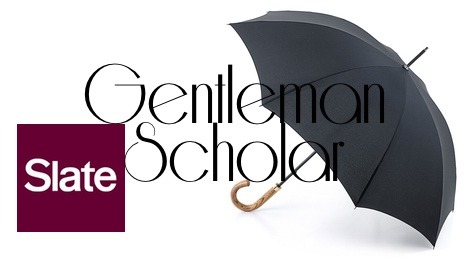 Slate.com contains a column By Troy Patterson called “Gentleman Scholar” in which he offers etiquette advice for the contemporary man. One of his articles from April 2014 was brought to my attention recently: A Gentleman’s Guide to the Umbrella.

His advice regarding buying an umbrella is the same advice I give: don’t get a $5 flimsy device from the corner store, but there is seldom reason to purchase anything over $20. Black is always fashionable, but any simple neutral tone will do. If you have the money to spend, invest in a handle that you enjoy as much for the visual appeal as for the feel in your hand. When I am asked about the best tool for fighting ruffians as well as the rain, I can’t recommend the “Unbreakable Umbrella” as sold on the Internet. Although it is guaranteed to outlast the fight, I would never carry something that an assailant could take away from me and cause great regret for the financial loss.

Here are the main points of etiquette covered in the article:

When entering an apartment from an interior hallway, leave the umbrella outside. When entering a house, ask what to do. Remember that a man-made puddle on a subway seat is an insult to the whole community. A considerate umbrellarian does not deal with text messages while going down the sidewalk, the better to keep an eye out for opportunities to yield the right of way, as it were, by raising his arm to avoid collisions. An umbrella’s natural state is vertical (but don’t sling it over an uncouth shoulder). An umbrella is rarely to be used for anything other than keeping people dry, but if you’re sitting in the gallery at a music hall, you may correctly pound it against the floor to show approval, adding some percussive notes to the lusty crowd noise.

The article goes on to mention the traditional notion of offering to shelter a lady under one’s umbrella, and the modern concerns over patriarchal overtones and feigned chivalry as a seduction tactic.

The Gentleman Scholar generously mentions our Umbrella Self Defense workshop, and wonders whether we teach according to Barton-Wright’s boast that he can “sever a man’s jugular vein through the collar of his overcoat.” In fact, we do teach that type of blow, but the hyperbole is perhaps overblown. There are other positions and strikes that are preferred for the umbrella over the malacca cane to compensate for the umbrella’s inherent weaknesses and the defender’s safety in realistic scenarios.

We have two remaining Umbrella Self-Defense workshops this year, taking place today, 15 February at 2:00 p.m. and again one month from now on 15 March. If you already have plans for this weekend, register for our next (and last!) workshop in practical self-defence with Vancouver’s ubiquitous accessory.