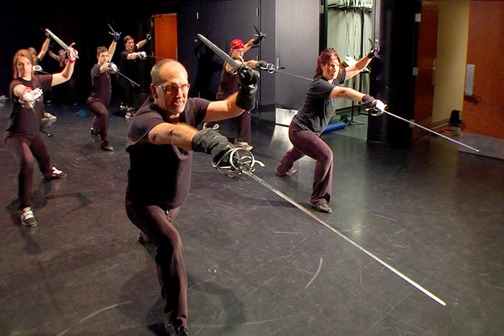 In the article linked below, Paul Dennhardt, a theatre professor at the College of Fine Arts of Illinois State University, explains important aspects of stage combat that should be understood by everyone in theatre by now. Sadly, most productions still don’t know where to begin with a sword fight, or what the process involves, but his production of Macbeth in March revealed an effective process.

Below is a summary and my thoughts, but I hope you also read the original article here: Specialist makes sure ‘Macbeth’ gets the violence just right.

First, Dennhardt consults with the director to get a broad view of the vision for the play overall, and what kind of violence will be required. Every play is different, so the choreographer needs a clear understanding of what the director wants and what the set, setting, lighting and tone will be.

While choreographing, he looks for opportunities to show character traits that are thematically relevant and reinforce the story. In this case, the fact that Banquo and Macbeth are equally valorous, and that they mutually support each other. If a fight is only fencing, with each fighter only thinking, “Do I need to parry that or evade? Will the cut or thrust work better?” then it’s just a demonstration of sword technique. For it to belong to the world of the play, the performer has other questions:

When working on the final confrontation between Macbeth and MacDuff, Dennhardt and the director worked together beat-by-beat so that the fighting integrated with the directorial vision.

The most important part comes at the end of the article, which I’m reprinting here, since I couldn’t say it better myself:

“You have to have the appearance of reckless abandon, and yet be meticulously choreographed to be believed eight times a week.”

For more on acting the fight, read my article from September 2013 called How to Deliver Intention and Intensity.

I think it’s critically important to perform your stage combat in a scene with dialogue so that you can look for the character moments within your fight. Learning to create an illusion of a cut, blocking a punch, or strangling someone unconscious is the easy part. Convincing an audience that your character is making the decision to attack in that moment and of the difficulty of violent confrontations is hard.

In the FDC Basic Certification intensive, you’ll perform three scenes, one each with sword, quarterstaff and unarmed. These scenes are not just strings of mechanical movements, but believable, acted scenes including full-speed realistic fighting. Can you create a desperate struggle while keeping your partner safe in every rehearsal and every re-take on a film set? Join us for two full weeks starting 15 June, 2015.