HEMA is not a “dead” art. Notwithstanding that most of it is based on fight books from medieval/renaissance times, our community is seeing a modern rebirth of the art with new schools being established, old techniques being rediscovered or reinterpreted (or even created), a revived interest in lost swords and their related history, and, maybe most important, a general public interest in swordplay techniques – ancient and “future”– driven by popular media.

Writing of Saviolo, George Silver advises his countrymen “to beware how they submit themselves into the hands of Italian teachers, but hold to the good ancient weapons”. [1] 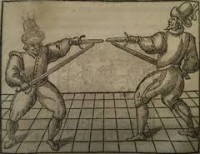 The fifteen-year old 1595 Club is bringing the 16th century sword traditions of Vincentio Saviolo back into the swordplay heart of doughty Englishmen.  Chris Chatfield, 1595’s founder and master-of-arms offers programs designed to develop students physically in conjunction with learning his interpretation of a historic technique of sword-based martial art, and, hopefully, to develop his students to be “more gentle and courteous” people.

“I see [the 1595] as an art, not a sport, … The old Italian word for swordsman is giocatore – a player, not of a game, but of a musical instrument. You learn to use your body like an instrument. The sword is like a paintbrush.”

A gentle and courteous art – with a dress code.

On this side of the Atlantic, master swordsman Steaphen Ficks’ Davenriche Martial Artes School has been teaching the 15th century fighting techniques of Italian Master Fior Dei Liberi for 17 years.  His final motivation for starting a salle was losing contact with his sparring partners, so he started a school to create some more!

A Foot on Both Pistes

The Mid-South Fencers’ Club is somewhat unique for sword schools – it teaches both Olympic fencing and historical longsword.

Coach Jeff Kallio has an interesting view on why people come to swordplay (of any type) and why they might turn their interest from Olympic style to the slightly more demanding practice and training to be able to spar safely with a longsword.

“It’s a four-pound sword that you’re swinging around and chasing people.”

Whipped to a Frenzy?

THE ATLANTIC (Washington, DC). Jan/Feb 2016. Big in Hungary: Whips and Axes – An ancient style of fighting makes a comeback

Baranta, from the old Hungarian word “to maraud”, is a modern fighting style based on hybridization of historical folk dancing, Mongolian wrestling, and the imagined combat techniques of medieval Magyar warriors. “They’re reaching back to a time when our knowledge is very uncertain, …”

This new martial art has come under scrutiny by some who are concerned that Baranta’s popularity is only a cover for a renewed interest in extreme nationalism and the resulting xenophobia.  A charge that has also been aimed at Russian and Ukrainian swordplay and martial arts practitioners.

After reading this, we can only hope that – like things posted here on the internet – no sword is truly ‘lost’ forever.  Given the number of swords that have been produced world-wide over history to date, it’s intriguing to speculate about what lies waiting to be rediscovered in the attics of old homes, bogs, plowed-over cold cellars or scallop-beds world-wide.