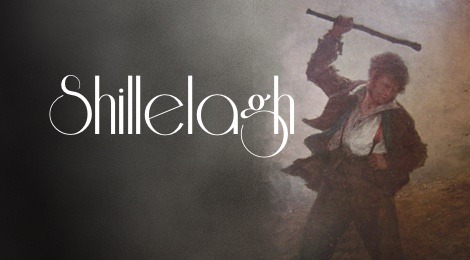 St. Patrick’s Day was this week, so let’s celebrate the shillelagh, or blackthorn walking stick and its fighting style. As Jon Mills explained in his post, the general Irish term for stick fighting is Bataireacht.

The shillelagh itself is a single piece of blackthorn or oak about three feet long. Longer sticks were called wattles and could be six or eight feet long. Shorter ones, about two feet long, would be called kipeen. Generally, the root knob is at one end and some are loaded, that is, impregnated with lead.

Sometimes called “knobsticks”, fighting with a heavy stick is common to many cultures. Medieval maces are related to older clubs, and some cultures without metal-working used knobsticks — for example, the Maori taiaha. From this amazing variety, we’ll focus on the most cane-like of them, as the Irish had to disguise their weapon as a common walking stick from the occupying English.

Some sticks seen in photos and available today retain their thorny protrusions, but a good fighting stick would have these smoothed down. The thorns do not add significantly to the effectiveness of the blow, and can make the stick more difficult to handle. Even those of artificial construction can have troublesome sharp protrusions that purport to be “authentic” but should be avoided.

Here’s a short video from a maker of authentic sticks in Ireland:

For an excellent history and introduction to Irish stick fighting, here’s an article from expert Maxime Chouinard: What is Irish Stick Fighting? His website, irishstick.com, represents his martial arts studio in Kingston, Ontario. The particular variation is called Antrim bata because it is from county Antrim, or Tickety-boo, after a historic fighter.

I asked Maxim about his practice, and he wisely said, “Sometimes we forget about living traditions, and the importance of keeping them alive as sources or oral history. I think that Antrim Bata is one of those traditions that should be safeguarded, and I hope that it can once again be valued in its native country.”

The style represented in many old manuals is a one-handed grip somewhere between the halfway point and about two-thirds down from the knob end. Strikes in friendly contests would be to knock off the hat, but of course that is to simulate a strike to the head.

My personal introduction to Irish stick fighting was from Glen Doyle, whose clan developed their own approach to the use of the shillelagh called Rince an Bhata Uisce Bheatha (pronounced rinkan watta ishka vaaha), which is Gaelic for Whiskey Stick Dancing.

The grip in Whiskey Stick is similar to the bayonet grip we use in Bartitsu, but with hands a bit closer together. The stick is held at about neck level. The primary strikes are fast, springing out horizontally and bouncing off the target to return to the grip, and can be done with either hand to surprise the opponent.

Sign up for our workshop on 27 March, in which we’ll cover situations where you are disadvantaged because your opponent is better armed than you. We’ll look at unarmed responses to knife and stick, defense with a light stick versus a heavy bat or longer stick, and other scary scenarios. Learning good technique is exactly what you need for this purpose. If you already had the better weapon or a fair fight, you could rely on strength or endurance to win a confrontation. Mastery is about overcoming a stronger, heavier, better armed opponent. Are you up for it? Sign up here!