“Put two kids in a room with long cardboard tubes and within seconds an epic sword fight begins. Kids love the idea of swordplay., and you heard that it looks great on a college application.”[1]

How many of us delivered our first ‘sword cut’ with an empty roll of ‘wrap’ (be it of Christmas, birthday, waxed paper or tinfoil origin)?
And from those simple ‘boppers’, (with or without those new-fangled high-tech enhancements), we grew up with a large selection of plastic swords with which to hone our pre-teen duelling skills. And apparently, if the lack of historical headlines are any indication, without causing a rash of the feared ‘you’re going to put someone’s eye out with that thing!’ accidents.
I find it curious and a little disturbing, that after decades of ignoring swords – a self-appointed group (who elected these people?) came out to condemn a plastic toy specifically designed to allow a child (any child) to go adventuring while emulating the latest of a long line of sword-wielding heroes.
Girls want and deserve their own cardboard tubes, plastic swords and later, live steel.
A note to older brothers with a history of teasing their younger, now-armed sisters … watch your back.

Melee and More in Malta

Sword players from 13 nations gathered in picturesque and historic Fort Saint Angelo for the Malta Historical Fencing 7th International Meeting, a combination of workshops, demonstrations and sword-related touring.
The host Malta Historical Fencing Association under president Andrei Xuereb focus their own work on the European martial disciplines as taught during the period of the Order of St John up to the 20th century; however the meeting itself did feature an eclectic mix of the usual long sword, side-sword and rapier events.  In addition, Mr. Xuereb reminded us that “a soldier needed to be knowledgeable in all the weapons available at his time and even those used by the enemy”.
Last, I so envy the Association the venue in which they held their event; what a wonderfully inspirational and relevant background to practice ones medieval or renaissance art. All that, and government support for their effort as well!

MITTELBAYERISCHE (Regensburg, Germany) 28 October 17 Mit einem Schlag zurück im Mittelalter
The 10-year-old Volkshochschule Regensburger Land sword play program has a truly eclectic membership history which mixes well with their program. Students come to the art through seeing demonstrations or participating in LARPing; they join to learn the authentic martial art; and then move on to historically accurate demonstrations and, if they wish, to full contact medieval bouts.
Beginner classes start with concentration, coordination and control (“we could offer sword yoga for women”); then to use of proper historical technique; and then to something delightfully translated as “run, think, hit”.
The item ends with an important point about how to safely conduct full contact demonstrations: “If I suddenly dropped my sword in a fight, my opponent would immediately stop, ” says Peter Weiß confidently. He knows he can rely 100% on his opponents.

Middle Ages Metal in the Mountains 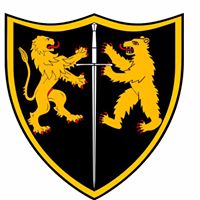 We don’t see much press about the 19 groups that currently make up the Swiss HEMA community, but this overview of 30+ fighters of ‘Leo et Ursus’ certainly makes up for it.
Studying and training in the 14th C Liechtenauer long sword tradition, the members of ‘Leo et Ursus’ are intent on being taken as serious martial arts practitioners and not as what they describe as ‘re-creationists’. Apparently, the group does not do ‘demos’ if I understand the item correctly, which could be a limitation if they wanted to expand their exposure … and participation by an intrigued and curious public.
And in keeping with the theme today … “As a girl she dueled with toy swords with her brothers.”

This item is a detailed exploration of the ‘state of the HEMA’ art as it is today in the German province of Saxony. It describes the martial arts tradition of the Schule Bloßfechter in Chemnitz; its venue and resources; how it conducts events and a special initiative to bring HEMA to … China.
The item ends with an interesting perception of what is ‘violence?’

YLE (Helsinki, Finland) 26 September 17 Lopelta löytyi yli 1000 vuotta vanha viikinkimiekka
While this item is not HEMA specific, it does demonstrate that even in modern times, we have not found ‘everything’ relevant to our art. A detector-armed beach comber in Finland found a ‘Viking era’ sword, the educated examination of which can only add to our community understanding of how such blades were made and used. Kudos to Mr. Pietilä for turning his find to the appropriate scholars rather than keeping the sword as a trophy.

Please note, the opinions and observations expressed above are my own and do not reflect the view of the Academie Duello