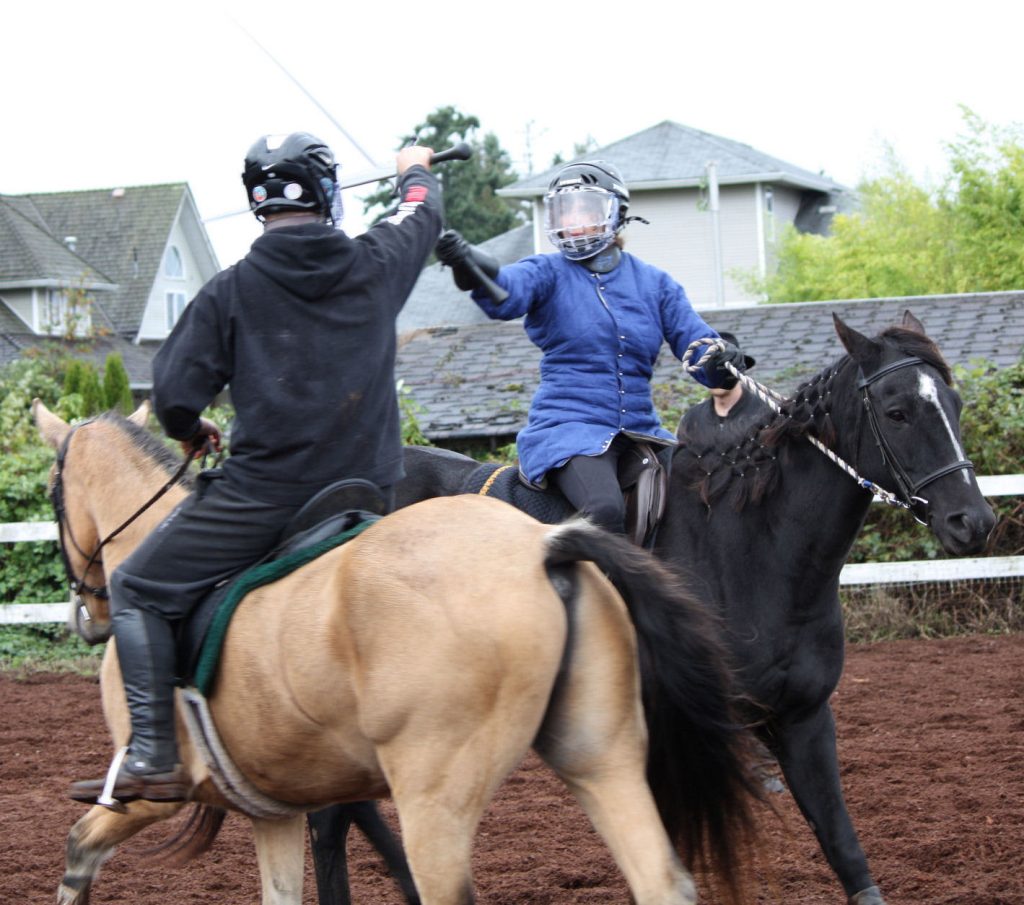 Until this weekend we had an unbroken streak of good weather for Mounted Combat.  In the two years we’ve been running the Mounted Combat workshops we’ve had stunningly good weather, with maybe a sprinkle of rain at the beginning or end of the day.  However, when our weather luck failed, it failed spectacularly, and chose the three full days of Carosella in which to do so.

However, our mounted combatants are a hardy lot, and neither cold nor rain nor wind kept us indoors or out of our saddles.  After two full days of Mounted Combat and Horseback Archery workshops participants still had enough energy (and dry clothing) to compete in Sunday’s tournament.

Teams of two had 45 minutes to groom and tack up their horses before facing the extraodinarily picky Richmond Pony Club judges.  Scores were very tight and it was the little details that made the difference.  This year everybody chose to braid as well, and special mention goes to Misty and Nadia who turned Princess out to match her name, with Rapunzel flowers in her mane!

We ran teams of two in Open, Intermediate and Beginner Divisions.  The games were 3 flag, stick-pegging and quintain.

This was very close with only 4 points difference between first and last.

This division contains level 2 and 3 riders, and only 1 point separated 1st and 2nd place

This division contained a ringer, Roland Cooper, but since Nadia has only been in the program less than a month, and just received her Riding 1 the week before we felt it was fair to team them up.  Kudos to Janet for getting on Kale for the first time and riding her in a competition!

I was pleasantly surprised by how many people were willing to head into the ring on foot despite the weather and run relay games.  This year the results of an archery competition was added to the the team scores.  To be fair, Robert shot with his head turned away (and still hit the target).

Games for the individual competitions were rings, spear, and balloon.  The scores were added to team scores to find the winners of each division who received a $25 gift certificate from either Stampede Tack or Country Feeds.

The points for first place were tied, so the winner was the rider with the highest individual score.

This was the highlight for many of us who’ve been longing to put our mounted combat skills to the test for some time.  We did a partial round robin, with each of the eight competitors fighting four matches each.  Scoring was based on wins and points.  To keep things fair we limited the pool of horses to our four best, Chicco, Winnie, Kale and Princess, and riders swapped off as necessary.

Special credit goes to Janet Eastwood, who has only been riding for a few months, and Kat Liffiton, who took a knuckle-immobilizing blow in the first round and kept fighting anway!

The grand prize of an embroidered wool show sheet went to the rider with the most cumulative points in all competitions: grooms’, on foot, mounted, and Green Spur.  This year we had a three way tie for second place, and only 1 point separated first from second.  Well done everyone!

An instructor with Academie Duello Greg, has only been part of the Cavaliere Program since January, and has been faithfully coming out to the barn for weekly lessons all spring and summer to work on his riding and horsemanship.  To go from beginner to grand champion in nine months is a testament to his dedication and enthusiasm.

As well as our wonderful prize sponsors, Stampede Tack, Country Feeds, and Academie Duello, there is an amazing number of people we have to thank for making Carosella a success.

Facilities & Equipment: Cassandra Tattrie, Kat Liffiton, Crystal Chung, Jeff Turner, Brittany Linnett & Chris Richardson.  This group of people in particular put in a huge amount of effort both before and during the event, sourcing, building and refurbishing equipment, cleaning up the grounds, organizing and supervising.  They were present from before the beginning till after the end of each day.  Carosella could not have happened without them, and they deserve a standing ovation.  Thanks guys!

There are photos of the event on the Academie Duello Facebook and Flickr pages, courtesy of Chris Richarson and Brad Duffy.  Not all the photos Chris and the girls took on Sunday are up, so if you want more of yourself, or higher resolution versions, message or email me and I will send them to you.

We’re not slowing down yet.  There are still two months of Cavaliere Progam classes before we take our winter break.  The Intro to Mounted Combat has been moved to November 3rd, but we will still be having our regular Mounted Combat Workshop this Sunday at 1pm.

Cavaliere Classes resume October 18th & 25th, and the last ones before winter will be November 10th & 17th.

Note that we will be discontinuing the Integrated Package in 2014.  It will be replaced by two more flexible packages that will allow you to take private and semi-private riding lessons along with your Cavaliere Classes and Mounted Combat workshops.  These will be priced at $200 for a 4-pack, and $480 for a 12-pack.