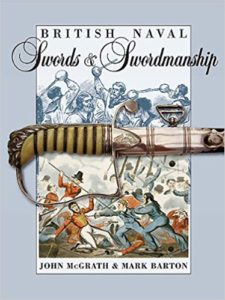 Cutlasses. A lot of people talk about cutlasses, but nobody does anything about them.

Few people in society practice a form of HEMA; and of those, even fewer are sailors. Which could account for the dearth of credible information on historical cutlass combat within our community.

British Naval Swords & Swordsmanship brings to our attention the very rich weaponry, sword-related combat history and swordplay techniques of the British Navy while at sea. Starting with the 18th Century, most of the books’ concerns are well after our usual areas of medieval or renaissance practice, but it does outline a rare martial art seldom considered in most HEMA forums. (Please note, there are some pretty impressive exceptions to that last statement.)

We’re in good hands here; the authors are acknowledged ‘career navy’ authorities on sharp Navy blades; having been published other items on the subject, and having the advantage of having been fencers themselves.

The book has a conventional approach with the greater part of it consisting of chapters on the various sorts of swords used while at sea; and those though naval related, that remained on shore. The area of our interest, sword training, gets one of the smaller chapters and that in turn is followed by the development of ‘classical fencing’ in the UK Navy. Last we have excellent guidance on how to determine the provenance of your Granddaddy Jenkin’s sword that has been sitting ignored too long in the attic.

If you want to know about the history, development and production of the naval officers’ swords (with Lord Nelson having his own chapter) or cutlasses used aboard Her Majesty’s warships (or in select shore installations), this is your go-to reference. The chapters are awash with detail, relevant and clear photography, and are well supported with personal assessments by the authors. You will know why and how naval blades were developed in a select way for specific service in a unique environment.

Most HEMA is fought on flat and stable land and when possible, not in the rain – much less on a wet wooden ships’ deck encumbered by cables, fallen canvas and overhead impediments. Oh yes, make that deck bounce up-and-down, and left to right intermittently as well.

I’ll concentrate on the ‘Training in Swordsmanship’. Naval officers were initially (1730s) taught small sword as part of their basic training, if not for utilitarian reasons, at least to introduce them to the concepts of swordplay that could be used with swords more appropriate to boarding actions. Most fought with their own privately purchased swords until a standardised blade began to be issued in 1805 … with standardised training to go with it.
That said, the best known and most common sword for sea duty was the ‘cutlass’, or in official speak: “Sword for Sea Service”. Cutlass drill for the ‘swabbies’, those who would be doing most of the fighting (and die-ing) in any action, only began as“cudgelling” instruction in the early 1800s — and it was based on four infantry broadsword guards ‘useful for both defence and thrusting in an attack’.

As mentioned, naval swordplay at sea has some challenges not usually faced by the soldier or duellist:
“The preponderance of rigging and other obstructions added to the difficulty of fighting with swords during boarding. It should not be surprising that one notable difference between military and naval sword drills is the lack of over-the-head strokes in the latter, although there is a head defence. Captain Selwyn RN commented in 1862, that in the press of battle a sailor ‘having got up his sword arm and being unable to get it down again, [had] to use the hilt of his cutlass, and knock his enemy’s teeth down his throat’.” [1]

The eight pages within Training allude to a variety of cutlass-relevant fight books – and these are a good guide as to where to go for more specific information for cutlass drills and techniques.

Cutlass drill was probably a unique activity within a variety of navies in that it was kept long after its real utility, remaining as a form of group physical fitness training: 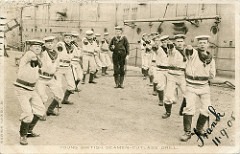 “Sailors were expected to be ambidextrous with the cutlass and the instructor was directed to put them through the exercise after having ordered ‘Change Arms’. The cutlass is a heavy weapon and, as well as building up stamina, this helped to develop both sides of the body equally. Towards the end of the nineteenth century, to ensure continued familiarity with the weapon and to maintain fitness, cutlass drill was normally conducted on board HM Ships for an hour once a week on Wednesday afternoons.” [2]

Of note, in Canada naval Petty Officers still carry cutlass’ on parade, and cutlass drill is still a ceremonial practice within our Naval Cadet Corps.

Though the book is well written, documented; generously supported by graphics and photography and luxurious in heft, you have to be a real naval aficionado to want this on your shelf. For most of us land-lubbers, the meeting the cost of this beautiful and authoritative volume to get to the modest (but interesting) eight pages of ‘swordplay technique’ would be an indulgence.

If you can’t justify a volume of your own, borrow ours from the Academie Duello Library.