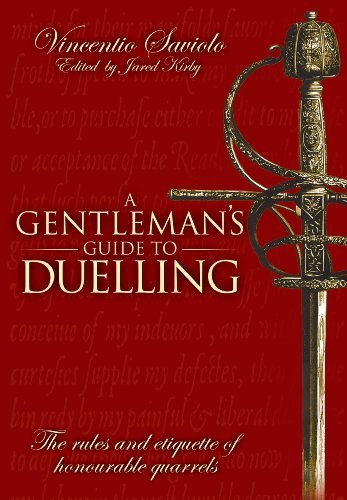 Jared Kirby presents his interpretation and editing of Vincentio Saviolo’s 1595 work ‘Of Honour and Honourable Quarrels’.
Vincentio Saviolo set up a fencing salle in Elizabethan London ‘about’ late 1580-ish, but he is perhaps better known to most in the HEMA rapier community as being the ‘dandified Italian’ against whom George Silver ranted. That aside, Saviolo had a successful career teaching the English upper class the mysteries of the rapier and dagger, and concurrently wrote this book on duelling etiquette and ethics.
Kirby for his part is qualified to interpret Saviolo’s effort; being a long-time HEMA student and instructor (achieving the honour Maestro d’Armi with the respected Martinez Academy of Arms).

The book starts with how the editor came to be interested in ethics and honour, and thence to the work of Saviolo … which resulted in this book. Following comes the standard life and times of Saviolo – his background in swordplay, his efforts in England and what he left as a legacy to Elizabethan swordplay.
I was somewhat bemused by the chapter “Finding Saviolo’s School”, but ended up enchanted and more importantly, educated on the difficulties modern HEMA scholars encounter when trying to reconstruct the background to prominent sword masters, their work or their locations from original documentation.

Saviolo’s eight chapters contain his ethical guidelines on how to act in good society; what constitutes an offence (the ‘lie’); when to fight – or not to fight a duel; and if you really must fight … how to go about it in a civilised and morally acceptable fashion.
Now this book has nothing for the HEMA rapier user on effective rapier technique nor tactics, but it is an interesting revelation on the Elizabethan point of view on how one should best resort to arms as a social tool for a very specific interaction.

I took away four items from Saviolo’s guidance :

– A proper duel is a ‘process’, and unplanned ‘rencounters’ are to be avoided as much as possible;
– Properly followed, the process allows for sober second thought and the chance for reconciliation without resort to arms;
– The process allows everyone to know their part and place in the duel or reconciliation process – everyone understands who must move first or next – and with what words or actions – to allow the desired end-state to develop; and
– This duelling is complicated stuff – only true ‘gentlemen’ could possibly understand it … so you grubby, beer-drinking commoners will please restrain yourself to fist fights.
In places I did feel as if I was reading ‘Lawsuits for Dummies’ … ‘the party of the first part will render unto that of the second part etc., etc.’ … but not enough to interfere with the reading flow of the work.

Last, if you are one of the many women that have taken up rapier, the opinions of this late 16th C Italian as to your place in affairs of honour will be of professional interest.

Kirby’s work is not for the rapier ‘sword fighter’, but it can be a valuable aide to the ‘swordplay scholar’ who wishes to put the use of arms during Elizabethan times into an accurate context of how and why they were used. This is very much a ‘niche’ subject … though the subject of manners and honour in society shouldn’t be.

My Quote Out of Context :
“From there, (Rocco) Bonetti’s success with the nobility grew. He charged extremely high prices for lessons, but his customers were wealthy and willing to pay these costs to learn the art of Italian rapier.”
Footnote: Silver says Bonetti charged anywhere from twenty to a hundred pounds. The average rate for a teacher from the Masters of Defence ranged from twenty to forty shillings*. Silver, ‘Paradoxes’, p.15 [1]
*Wes Comment: By the clever use of four websites (none of which are to blame for my result), I calculate that £100 Elizabethan is ‘about’ $31K Canadian ($22,600 US). If this is true, I now understand why setting up a HEMA school in modern times is an instantaneous and infallible road to immediate fortune and fame! [2]