Season 6 is upon us, and now’s as good a time as any to look back on one of A Game of Thrones’ most prominent features – its armor and costuming. The question everyone likely wants to know the answer to (around these parts, anyway) is whether you really could go into battle wearing Jaime Lannister’s plate, or Jon Snow’s cloak. So let’s dive in and check ’em out.

(Disclaimer: GoT is fantasy. It’s not real. Its costumes and armor have to serve a narrative purpose as well as being protective. Take this article in the spirit in which it’s intended, which is as a fun little intellectual exercise, and the opinion of one swordfighter.) 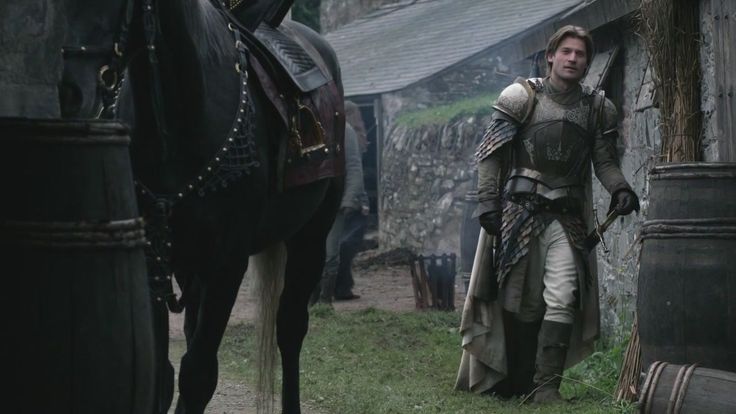 Fair dues to the designers of GoT – for the most part, what armor the characters wear looks like it could actually stand up to a few whacks of a sword. Jaime’s breastplate looks very much like an actual breastplate. But… no crotch protection, no neck protection, no leg protection, and leather gloves ain’t gonna save his hands if someone catches him on the knuckles.

Take a look at the scale armor pieces on his arms and hips as well. Those look pretty nice, but notice how the individual scales don’t lay quite flat. That’s a big mistake, right there. One upward swing with a longsword and the edge will slide right between those little plates.

Historical scale armor does exist, and two things distinguish it in general from Jaime’s armor here – the scales are smaller, and lie much flatter against each other. Examples include the Japanese gyorin kozane, or fish scale armor, and the Roman lorica squamata. The use of scale armor instead of mail is a trade-off, sacrificing the flexibility of chain for more protection against bludgeoning attacks, so Jaime’s choice to wear it on his legs – where he presumably needs more flexibility – is interesting. 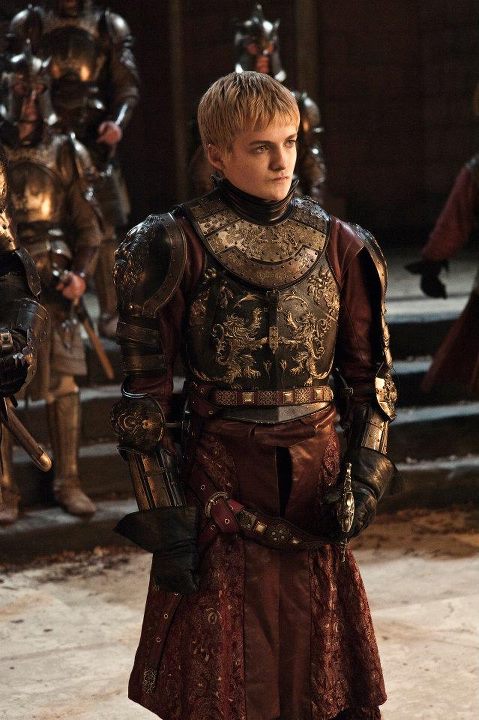 Nice leather skirt you’ve got there, dude. Still, we’ve got what looks like a proper gorget there, so at least his neck is protected. Forearm and elbow protection aside, he’s not wearing mail underneath the plate, so this looks pretty much ceremonial. I wouldn’t go into battle in it, but I would flounce around and demand that everyone tell me I’m pretty.

Almost all classic fantasy armor is loosely based on gothic plate armor from the 15th and 16th centuries, and in this respect, the designers of A Game of Thrones have hit the nail on the head. Surviving examples of plate armor are frequently ornate, lavishly decorated, and likely cost the equivalent of millions for the royalty of the day. Joffrey may not have gone into combat in this particular ensemble, but he would probably have looked right at home among the European nobility of the Renaissance. 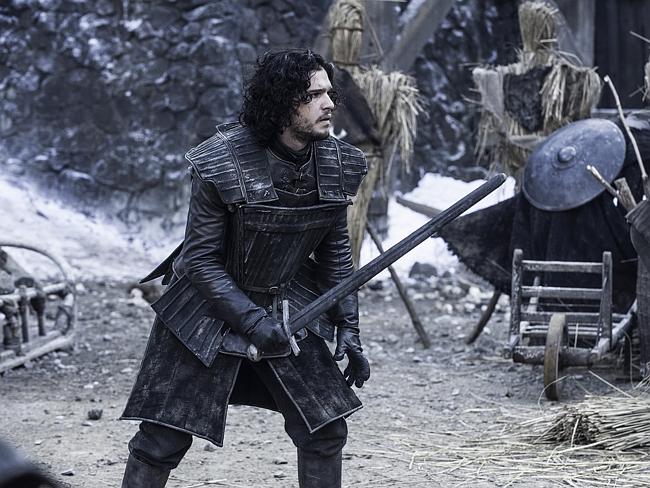 Someone’s going to have to help me here, because I cannot figure out what his armor is supposed to be made of. Is it metal rods sewn into leather? I’m at a loss to understand how this is adequate protection, because one thrust with a sword is going straight through that stuff and killing him. At best, it’ll protect him from being sliced if he catches a sword strike in the right direction.

He’s fallen into the same trap here of having no arm protection save for a leather jacket, no neck protection, and no gauntlets, but at least he’s not trying to fight in that gigantic furry cloak. A big heavy cloak weighing down your arms and getting in the way of your sword swings is a disadvantage after all, unless you’re fighting with the cloak itself. (Cloak fighting. Totally a thing.)

What he should be wearing is the mainstay of most common soldiers during the Middle Ages – the humble gambeson. Padded and quilted armor, along with a helmet, was the protection of choice among those who couldn’t afford mail or plate, and it was effective enough to see widespread use for centuries. Of course, wearing a helmet and bulky armor probably isn’t as camera-friendly as what we see Jon wearing here. 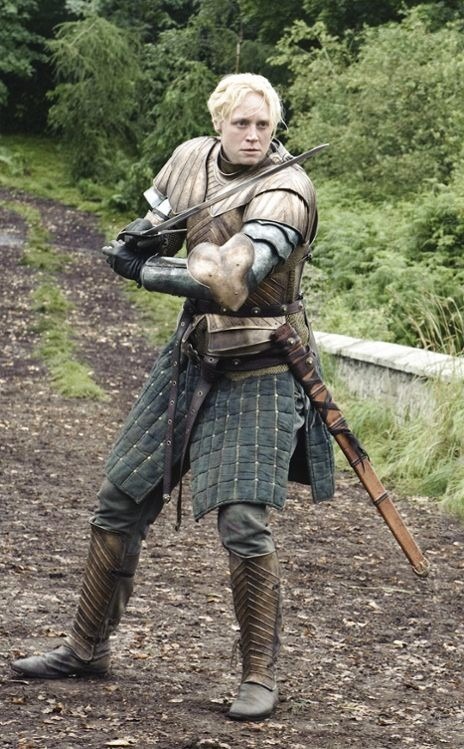 Now here’s a woman who knows the value of a good pair of greaves, in that she’s actually wearing them while everyone else just rocks the leather riding boots. That also looks suspiciously like a padded gambeson under her plate. Brienne of Tarth: serious business. Gimme a helmet and gauntlets, and I’d march to war in this armor any day.

Her greaves and breastplate are particularly interesting because the fluted pattern is typical of Maximillian plate armor, which appeared during the 15th century. This German style was designed to mimic the pleated clothing of the day, and the parallel ridges made the plate stronger. Brienne has both fashion and practicality on her side here.

Ser Gregor Clegane (a.k.a. the Mountain) 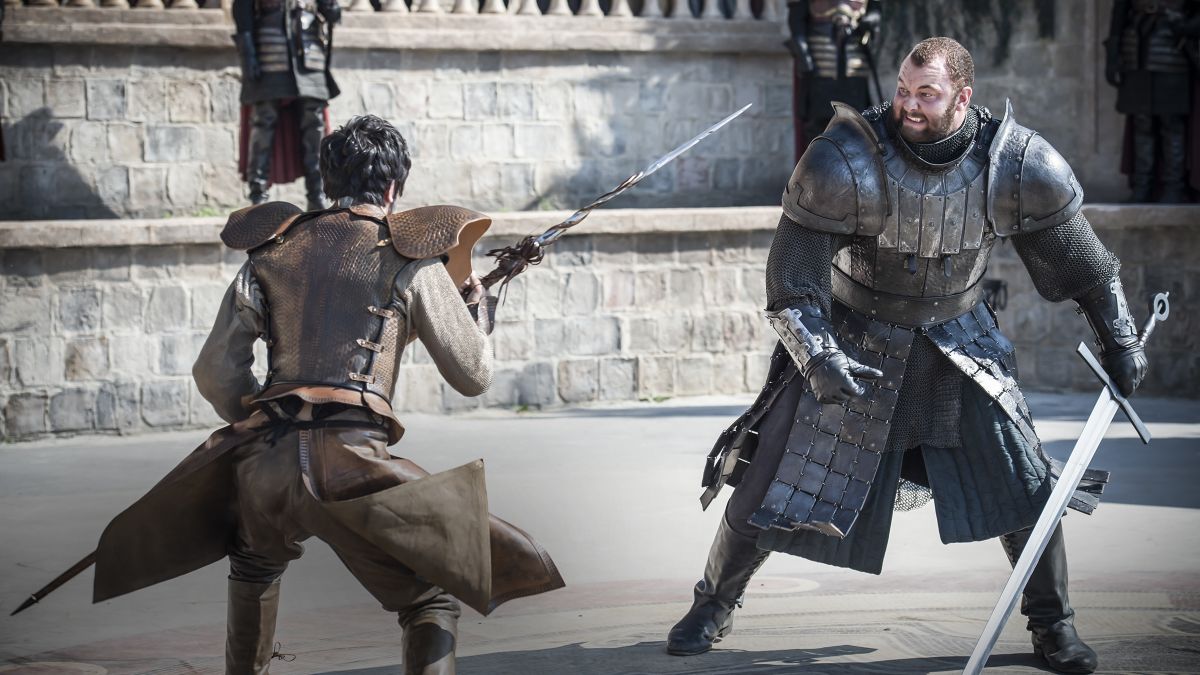 He’s the big guy on the right. Good points: he’s wearing a mail hauberk and a padded gambeson. Bad points: he’s forgotten to protect his lower legs and his hands. Take a look at his breastplate as well – what are those plates riveted onto, and why? Any bets on whether it’d split along those seams if he takes a hit from a warhammer?

I don’t think I’d want to fight in this particular ensemble, but at least it’s better than the guy who’s decided that a few pieces of leather over a shirt are sufficient against a longsword. The historicity of leather armor is still debated – and ‘studded leather’ has never been an actual real thing – but what Oberyn Martell (on the left) is wearing just isn’t enough. Let’s assume that his chestpiece is made of cuir boulli, which is boiled, hardened leather. That might save him from Ser Gregor’s slashing attacks, but it’s inadequate against a longsword thrust. The one place where leather armor would be appropriate, on his arms, is unfortunately left bare.

The armor of A Game of Thrones is pretty good – where it exists. The problem is that they just don’t wear enough of it for my taste! No gauntlets, for example – almost every fighter in GoT wears little more than leather gloves instead of real gauntlets. They also seem to go in for leather boots rather than proper greaves. If this were real life, and they actually needed to protect themselves, these would be serious oversights.

But this is fantasy, and it’s also a TV show whose purpose is to entertain. So the characters don’t wear helmets nearly as often as I’d like, and they can do without greaves because the audience probably doesn’t watch their feet all the time. Real gauntlets would be prohibitively expensive on a show that already costs more per episode than any other I know of. So let’s enjoy the spectacle, trade fan theories, and roll on season 6.

This is a guest article from a student. If you enjoy Claire’s writing, we encourage you to check out her blog and her fantasy novels at raynfall.com. She writes about swordplay in TV and film, archery, the publishing industry, and traditional bookbinding. 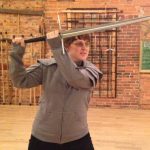