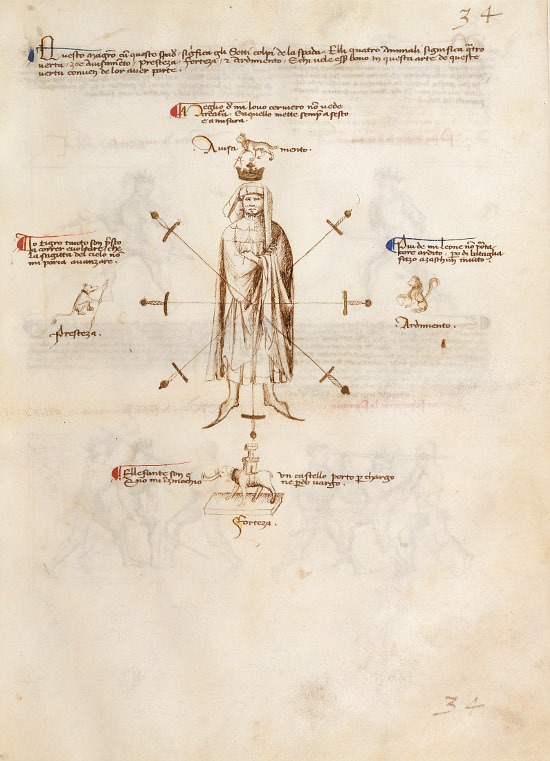 This post is part of a series on the Segno of Fiore that displays 4 animals each representing a different martial trait the lynx, tiger, elephant, and lion.

“I am the lion: nobody carries a more courageous heart. I offer everyone battle.”
Tom Leoni translation – Fior di Battaglia, Getty Museum

To stand across from a man with a sharp sword in his hand requires a certain element of courage. Even in our modern practice there can still be a palpable quickening of the heart even with the knowledge that the sword is blunt and that the other hopefully does not mean you real harm.

Having a respect for the weapon as if it were sharp, and your life as if it were limited, is a powerful tool in modern martial practice. To truly know the art we need to get as close to its traditional setting as possible.

Finding the balance between audacity and prudence is challenging.

As an instructor I have often found it easier to work with a student who is brazen to the point of suicidal than tentative to the point of catatonic. The journey of bringing someone back from a bold extreme can often be easier. It is more about equipping (teaching someone how to parry and tactically approach) and contain (learning to pick your moments, not over-extend, etc). Whereas it can be a more challenging road to build with someone who is afraid to even step into the range they need to for swordplay techniques to truly make sense.

The challenge here is that many techniques in a combative environment require 100% commitment (or at least 90%) to be successful. It’s not something that you can build to in baby steps. 10% commitment will not give you 10% success anymore than 70% will give you 70% success. It’s all or nothing. If you’re seeking confirmation data from partial steps forward, you’ll avoid a lot of successful roads.

In our look at our final animal we’ll explore techniques and exercises that I employ as a student and as an instructor to help build boldness and succeed in martial application.

The advantage of practicing with blunt swords is that you won’t die. Typically the worse thing you’ll get with responsible partners is a bruise. We use many different drills at Academie Duello to challenge students to move from fear to respect of the opponent’s weapon.

1. Mortal/Immortal – Fencing where one person is mortal (calls blows in the standard way) and the other cannot be struck down (ignores all blows and continues acting). The objective for the immortal is to move through fatal hits to complete techniques. Often the permission to continue forward regardless of outcome is enough to put the body in the right place for a technique (with defence) to be successful.

2. Counted Blows – You must strike a certain number of blows in a particular action. This can be done with a quality of immortality or as an objective in regular sparring.

3. Complete No Matter What – All actions are concluded even if you’re struck in the middle of them. Or all actions have a guarded retreat even if you’re struck while conducting them. If you find that you often call ‘hit’ before you’ve actually been struck, this type of exercise will help you build the practice of continued movement and ensure you don’t give up until the deed is done.

Sometimes a tentative person simply needs to approach their fencing through solid defence (truly the origin of the word) rather than through offence. Focusing on parrying, engagement, line control, and exercises that emphasize this side of the fight, you can build your confidence to stay alive even in dicey situations.

In sparring sometimes I make it an objective not to get in and strike my opponent but simply to stand close to them without being struck for as long as possible.

Back to the idea of slow and scaling speed fencing. Work at a speed where you can respond to the action not react to it. My destination here to play on an edge where you are challenged but not so nervous or fearful that you’ succumb to panic reactions and knee-jerk movements. Remember that speed comes through efficiency and smoothness. Both of these things are impossible if you’re freaking out every time you come in range of your enemy.

Often the most powerful thing you can do is try to push yourself to the boldest extreme. Harness your courage and spend some time each day drilling in a space that makes you uncomfortable. Daily doses are good medicine.