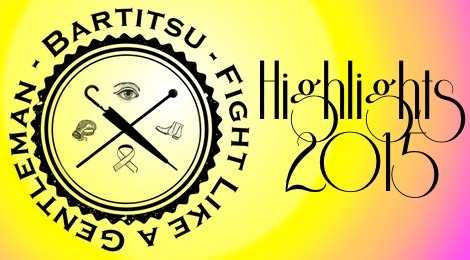 It’s both emotionally satisfying and productive to summarize the previous year and take stock. In this blog, it can also have a benefit to the reader to gather the links and events from the previous year in one place. So, I hope this retrospective benefits you as much as compiling it benefits me.

And here’s some articles from prior years that I’ve had requests to repost:
Bartitsu Reading List
5 Strategies of Bartitsu (Required for Blue Sash test)

This year, we began holding a Bartitsu-focused Open Floor on the second Friday of the month. Of course, Bartitsu students are encouraged to spar on any other Friday’s Open Floor time, but once a month it’s nice to reserve part of the floor and get some dedicated time in.

In March, we held two workshops at VISS, the Vancouver International Swordplay Symposium. Powerful punches was the topic of one and the other explored aspects of Victorian physical culture: warm ups, Indian Clubs, kettlebells and feats of strength.

The first weekend of July was Gearcon in Portland, at which I reprised my Victorian physical culture workshop, and taught and assisted at a few Bartitsu seminars, including a women’s only class.

Besides our Umbrella Self Defence workshops throughout the winter, we also added a Multiple Attackers workshop in August that was very successful. And although not strictly Bartitsu, we had a great time at bullwhip cracking workshops held in November.

This year, we’ll have repeats of our most successful offerings, and some new ones too. If you have requests for specific workshops, please let me know, or tell the Front Desk at Academie Duello.

Throughout the year, the following students earned their Blue Sash:

I’m looking forward to a great 2016, with more workshops in umbrella and bullwhip and other skills, teaching over 250 hours of ongoing classes, and seeing you gain both the skill and confidence to fight like Sherlock Holmes.