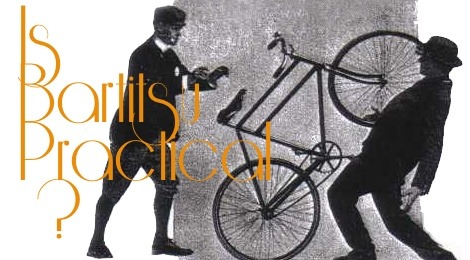 In a preview of a course in Bartitsu taught at the Idler Academy in London, the Kensington & Chelsea Today newspaper summarized:

‘Bartitsu has been devised with a view to impart to peacefully disposed men the science of defending themselves against ruffians or bullies’. The language of the fighting style is enthralling and truly Victorian. This is probably one reason for it experienceing a rennaisance since the Electronic Journals of Martial Arts and Sciences started publishing rediscovered articles by Barton-Wright in 2001. The Bartitsu Society, founded in 2002, has now lasted longer than the original Bartitsu Club, founded by Barton-Wright, which closed down in March 1902.
http://www.kensingtonandchelseatoday.co.uk/motoring-and-sport/sports/a5ffk2fjeb.html

At Academie Duello, we focus on the four martial arts that are combined to form the core of Bartitsu: Jujitsu, pugilism, savate and stick-fighting. This is alluded to by the inventor Barton-Wright: “Judo and jujitsu were not designed as primary means of attack and defence against a boxer or a man who kicks you, but were only to be used after coming to close quarters, and in order to get to close quarters it was absolutely necessary to understand boxing and the use of the foot.”

His emphasis on unarmed self-defence is also obvious with his summary of the essential strategy of Bartitsu: To disturb the equilibrium of your assailant, to surprise him… and to subject the joints of any parts of his body to strains they are anatomically or mechanically unable to resist.”

The walking stick, however, is recognized today as the main unique feature of Bartitsu, and a major attraction to most students. The most practiced aspects of canonical Bartitsu are his two-part article entitled “Self-defence with a Walking-stick: The Different Methods of Defending Oneself with a Walking-stick or Umbrella when Attacked under Unequal Conditions.”

But in the research of the Bartitsu Society, published in the Bartitsu Compendium vol. 1, there is an entire section on “Self Protection on a Cycle,” from Pearson’s Magazine 1901.

The Telegraph has an article referencing this, including an interview with Neal Stephenson: Contemporary bicycle-based self-defence: http://blogs.telegraph.co.uk/culture/peterrobins/5673831/Contemporary_bicyclebased_selfdefence/

And here’s a great article from a site called Roads Were Not Built for Cars, including many period pictures of cycling self-defence and Vigny stick fighting as well: http://www.roadswerenotbuiltforcars.com/category/1900-1905/page/2/

So, Vancouverites, never forget that Bartitsu is a living martial art, designed for adaptability to your circumstances. Whether you make use of our bike lanes and want to learn to use your bicycle to defend yourself, or walking on a rainy day with only your umbrella for a weapon, or perhaps you happen to have a pen in your pocket to enhance your safety… Bartitsu is as practical today as it was a century ago.

So, if you’re peacefully-disposed and want a scientific means of defence, sign up for our 4-week introductory course, Fight Like Sherlock Holmes which starts 30 November. Sign up by contacting info@academieduello.com or 604-568-9907.