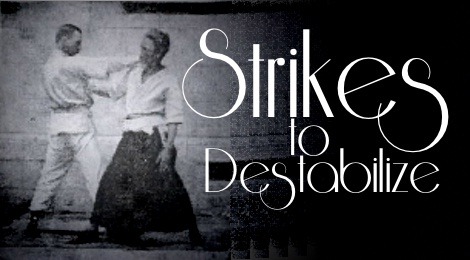 Bartitsu’s fusion of martial arts has jujitsu at its core. “Jujitsu” mean “The art of suppleness” in Japanese, and focuses on core “soft” techniques such as:

However, there are strikes in jujitsu which are called “atemi” in Japanese. These strikes are almost identical to the techniques in katate, another Japanese martial art, and use the same names for those strikes. There are punches, kicks, elbow strikes and knee strikes, among others.

What differentiates atemi from any other strike? In one sense, it is a question of the method and the circumstances when they are used. Most of the skills one learns in karate are atemi, and a punch in the karate style is very recognizable.

In jujitsu, although the strikes use the same method, it is not merely a combination of karate with jujitsu, but also involves the reason for a strike. Atemi is the judicious use of strikes to surprise or destabilize the opponent’s position, making other techniques easier. In other words, one might never overpower a taller opponent without a well-placed punch which causes him to bend forward. Jujitsu is also concerned with real-world self defence, which means that the jujitsuka should practice their defences against other students who are punching and kicking the way a strong attacker would. To train both sides of the fight by spending time on strong punches and kicks is useful for testing whether your jujitsu really works.

In Bartitsu, our atemi are sourced from bare-knuckle boxing and savate. In other words, where traditional jujitsu incorporates the punches and kicks of traditional karate, Bartitsu eschews them in favour of Western traditions. What remains the same is the philosophy of when to use strikes: as surprising and destabilizing hits which make jujitsu holds and takedowns more effective.

For example, in the first Pearson article (March 1899), sequence No. 5, Barton-Wright explains the strike: “… it will only be necessary to pretend to deliver this blow; the object of the blow being not so much to injure your assailant as to make him throw back his head in order to avoid the blow, by which means he will involuntarily lose his balance.”

In practical application, we become very aware of the range at which punches and kicks are more effective than grappling. A Bartitsuka will focus on their boxing and savate until they are inside the grappling range, at which time an immediate shift to jujitsu is required. Even better, our training in Bartitsu uses “combos” or sequences of moves that begin at a striking range, and assume that after the first movements, the range is likely to collapse. Therefore, we look at following up a strike with a joint lock or takedown.

Mixed Martial Arts (MMA) fighters often train in Gracie Jujitsu which specializes in ground fighting, then add strikes from Muai Thai kickboxing. It is easy to see that well-rounded fighters ought to be able to punch, kick, takedown and joint-lock, and different cultural groups have fused different styles to make up for deficiencies in their primary combat style.

Interestingly, there is a form of jujitsu that was invented in France when jujitsu was introduced there, just like Bartitsu in England. Atemi Jujitsu was started by the “French Gracie” Bernard Pariset. Traditional jujitsu was primarily aimed at defeating an armored opponent (a samurai), in the same way that Italian abrazzare wrestling was developed in Europe . However, in a modern context, the use of atemi becomes more useful because the unarmored bandit is vulnerable to strikes. Atemi Jujitsu is very close in philosophy to Bartitsu in this regard. I find it interesting that English Bartitsu chose to adopt Savate from France while the French version chose to keep the Japanese atemi.

Don’t forget about our rank exam on Friday, November 18. We have three candidates for the rank of Scholar, or Blue Sash, and they need witnesses and partners to test with. So if you’re a current or former Bartitsu student, I hope to see you next Friday at 7pm at Academie Duello.