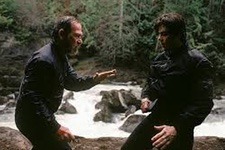 What does it mean to make acting decisions in a fight scene? Being angry or frightened or stone-faced during a sequence of moves is perhaps the only thing you can maintain besides the accuracy of your fight choreography. However, there is so much more you can do before the first move and between phrases when you have a pause in the action.

But what is a realistic pace for those moments? What happens in real fights?

We can get some information from accounts of fights relayed by journalists and writers. There are collections of such accounts of duels, and we have several in the library at Academie Duello.

The following description is from “Trip to California in 1849,” from The Overland Monthly, April 1889. A knife fight might be dramatized to sell more travel guides such as this, but it can give you some ideas about the pace of the fight and the emotional expression of the fighters.

Leaving the dancers and the lively scenes about me, I was drawn, accidentally, towards a group of the commoner class at some distance away, and witnessed a duel between two peons. Stripped to the waist, barefooted, the pants drawn up and rolled above the knees, the left arm wound round with a poncho, the right hand grasping a sharp-bladed knife, the two men stood for a moment preparing for the fight. They were strong, muscular, and wiry, both young, and evidently in a drunken, quarrelsome state. They provoked each other with words. I could not understand, but no doubt they were insulting enough to answer the purpose. A circle of spectators formed around the combatants, but no attempt was made to interfere with them, with the exception that once or twice some maudlin, half drunken, crying women tried to make peace, but their presence seemed to add fuel to the flames.

All of a sudden, one struck his first blow, which was well warded off, and then both peons stood eyeing each other like wild animals ready for a bloody feast. One had the right arm partially raised in the attitude of striking, the knife blade flashing in the sun’s rays. His opponent stood firmly on both feet, with his left arm covering his chest, his right hand hanging down at his side, the point of the knife from him, and pointing backwards; his knees were slightly bent, and with a startling, catlike jump, he sprang forward and took his foe by surprise. Before he could defend himself a deep gash was cut across the chest, just above the heart.

The fight now became active on both sides, and continued without cessation for several minutes; occasionally could be heard the clinking sound of the knives as the blades met or were slid from each other, and both men’s bodies showed the severity of the fight. Numerous ugly wounds appeared, and the warm, crimson blood covered the dark, naked skin. Both showed exhaustion, and with one impulse hesitated, to obtain time to gather breath, panting with exertion. Once more they grasped their knives, this time more firmly, with their muscles strained and swelled; without a word being spoken by either, the eyes gleaming threateningly, it was seen by the spectators that a decisive moment had arrived, yet none dared to interfere to prevent further strife. Gradually they drew together, step by step, creepingly and with caution; there was no hesitation, but an evident desire to obtain advantage. Of a sudden, simultaneously, both men sprang towards each other to meet at close quarters; a thud was heard, followed by a second one; then one of the combatants turned slightly on his heel, made a convulsive spring off his feet, and fell flat upon the ground,— the knife blade had pierced his heart. For a moment his adversary stood rigidly erect; his eyes opened and closed; his face became a ghastly yellow; the tongue slightly protruded from the half open mouth, exposing a white set of teeth; he seemed bewildered and lost, suffering with pain, arid suddenly, as if realizing the cause as well as the location, he raised his hand to his throat, and grasped the knife handle of his foe. It had been sent with a firm upward blow through the hollow above the chest, cutting the windpipe, and came out at the back of the neck. His limbs began to tremble, the flesh to quiver, and doubling downwards in a heap, he fell on his side upon the turf. In a few moments more his death struggles were over. The spectators slowly dispersed, leaving the dead bodies on the duel ground, as unconcernedly as if nothing unusual had happened. The mounted police made an appearance some time after and had the bodies removed.

Whether or not you have a knife fight to perform, the pace and tactics of this fight can inform any duel. On the other hand, you may want to consult accounts of duels with weapons similar to the one in your scene. However, these can be tough to find without making a habit of reading such things all the time.

Don’t forget our next FDC certification course if you’re an actor who would like to perform fights on stage and in film and TV. We call it Combat Acting because your test for Fight Directors Canada will include three scenes with full text, acting skills as well as safe and exciting fight content. Basic Actor-Combatant certification is great for your acting resume, and recognized everywhere for our high standards.

The course is two weeks, 9am-5pm Monday to Friday, June 15-26. If you want to get some practice before the intensive, join our Performance Combat weekly classes.