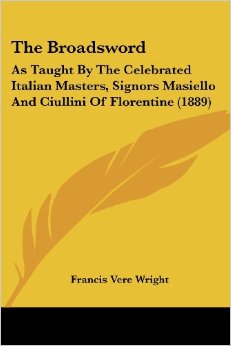 By 1901, with some of the lessons of the Boer War learned, regular instruction in swordsmanship had practically been abandoned in the British army.  So, when in 1914 the future Field Marshal Montgomery […] led a charge with sword in his right hand and revolver in his left and found himself confronted with a German, he realised he had never been instructed how to use the sword as a weapon.  So he kicked the man, he later wrote in his memoirs, ‘In the lower part of the stomach’.  Effective, but hardly in the best traditions of the beau sabreur. [1]

Col. Francis Vere Wright’s translation of Masiello’s The Broadsword: As Taught By The Celebrated Italian Masters, Signors Masiello And Ciullini of Florentine is actually very much a transitional document within HEMA history.

After the end of the Napoleonic Wars, interest in swordplay waned in England for the most part, and the traditional broadsword skills of the doughty Angelo had long lapsed into historical fight books.  By the very late 1800s, Fernando Masiello was invited to bring the new and flashy sabre fencing techniques of Master Giuseppe Radaelli to England for the betterment of young subalterns … and the effort resulted in this instructional manual that was to go hand-in-hand with a new, lighter, straight-bladed broadsword being developed for service.  Despite these efforts, formal swordplay training within the English Army was disappearing by 1901.

The ‘broadsword’ techniques detailed within are actually those used with Radaelli’s favoured duelling sabre — and are Masiellos’ attempts to ‘balance’ the requirements of effective and fatal military sword use while ‘in the colonies’ with those needed to gracefully defend one’s honour at home (Italy, as duelling had near died out in England) against an outraged husband/fiancé/father/creditor (choose one or more as appropriate).  This document is the link between English swordplay as a martial art and its existence as a sport.

The ‘fight’ part of this fightbook would be quite familiar to anyone who has undergone military training.  The student is led step-by-step through perfecting a half-dozen cuts, after which they are introduced to the related and appropriate guards, which in turn result in a third action … be it beat, cut, point or riposte.  Most of the dozen guards and cuts do occur from the elbow instead of the previously favoured shoulder, and are aimed against the upper torso.  “Like all army training manuals they enable even the slowest intellect to acquire a technical skill.” [2]

Again, as with this series of reprints, the sixtyish pages are quite plain and the few diagrams are … functional. That said, the reality that the sword drills presented would never again be used — neither by martial artist nor Olympian — notwithstanding, this inexpensive reprint is worth your shelf space; not so much as a curio, but as an artifact by which you can understand how our art transitioned into Olympic sabre.  Lastly, the work reflects a time when the white arm was finally and irrevocably giving way to black powder.