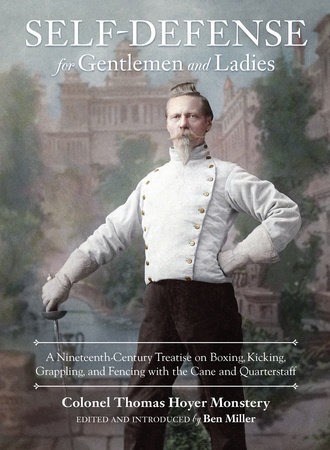 In about 1877, Colonel Thomas Hoyer Monstery wrote: “I hold that every gentleman should be able to protect himself from insult and violence, with or without weapons.” [1]

Words as true now, as they were more than a century ago! [2]

But why listen to Col Monstery?

In Self Defense for Gentlemen and Ladies, Ben Miller has edited a wonderful, relevant and timely exposure of a 19th century personality that really does deserve recognition for his part in educating the North American public regarding the benefit of martial arts training — including swordplay.

A contemporary to Captain Alfred Hutton and Egerton Castle, I found Monstery’s contribution to HEMA quite modest, though he did have a series of successes teaching historical swordplay and his version of self-defence in his own salle. Located in New York, Monstery had a significant impact on America’s largest city, as a proponent of the serious application of properly-taught martial arts. Monstery believed martial arts was the best mental and physical fitness regime for men (of all ages and health) … and women.

In this collection, Miller recounts in a respectful — but hardly worshipful — manner Monstery’s eclectic history as a swordsman, soldier of fortune and general gentleman about town performing international acts of derring-do. (Unlike Hutton and Castleton, the Colonel actually fought some sword duels.) It is through these experiences that we are shown how Monstery came to his knowledge of historical swordplay (and martial arts in general); how he practiced the art for real in both times of peace and war; and ultimately, how his journeys and experience created his unique view of the value of swordplay and martial arts in a gentleman’s mental, physical and ethical development.

That said, there are some details that appear to be missing. It would perhaps have been of value to understand just exactly what style(s) of swordplay Monstery taught, and what his background was in learning the art.

Futhermore, this is not a fight book. Except for the editor (Miller)’s chapters, this work is a collection of press items featuring various aspects of physical fitness and self defence that were in vogue during the Victorian era.

Monstery did teach and write about how to best train for (and teach) boxing, cane and staff. His method for classroom instruction in armed combat would be very familiar to anyone in service. While maybe not quite suited for those desiring personal attention (though, trust me, you will get that if you are the only trainee in a bayonet thrust line that is not aligned with the others!), it is a method that works well when the focus is training large groups quickly in technique and muscle-memory drills. Conversely, Monstery’s instruction services in the discipline of swordplay were primarily advertised as a tool for achieving physical fitness. He had distinct opinions on how best to use historical swordplay to maintain one’s health, namely:

This book’s historical interest notwithstanding, it does possess a few weaknesses. Fellow blog author (and head of both the Stage Combat and Bartitsu programs at Academie Duello) David McCormick points out to this novice-to-pugilism that he has serious reservations regarding just how well Col Monstery apparently understood the science of boxing. (For some fundamentals of pugilism as taught in the Academie Duello Bartitsu program, please click here.) McCormick is additionally concerned by the way in which Monstery avoids completely the requirement to understand and even participate in grappling. He also points out that there is no actual swordplay technique described within, despite what the elegant cover would lead you to believe. Lastly, the title refers to ‘self defence for ladies’, a discussion which is completely lacking in Monstery’s columns. [7]

Despite these potential flaws, Miller has given us an entertaining and useful work on a too-long forgotten, self-proclaimed ‘Master’ that, though he neither developed anything new in the art of swordplay nor championed any particular Master of the past, was a ‘taller than life’ figure in keeping self defence — its health benefits, lifestyle and ethics — prominently in the eye of an American public that lacked theretofore any knowledge of historical swordplay or its contemporary martial arts disciplines. [8]

If you are interested in the historical approaches to the study and teaching of self defence, this book but may have value for you in that it depicts our art as it was practiced in a time and place that has seen little serious study.