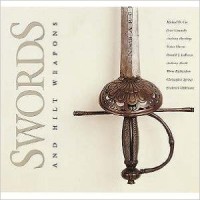 Swords and Hilt Weapons is a beautifully illustrated, introductory compendium of 4000 years of sword and hilted-weapon development as it has evolved in both time and space. Developments from the Bronze Age through to modern times are briefly explored and concurrent areas of geographic or cultural “uniqueness” are featured. And while this book concentrates on European works and to a lesser extent on Islamic-area and Japanese blades, African, other Asian, Mesoamerican and even North American swords receive their own chapters.

For the HEMA community, there are perhaps four of sixteen fully utilitarian chapters contained therein. That said, the chapter on ancient swords does offer us a useful set of definitions as to what blade length constitutes a dagger, a “dirk”, a short sword or a long one. [1]

Anthony North writes three of these chapters from the Victoria & Albert Museum, has access to and experience with public and private collections of historical weaponry, and is perhaps better known to us as the author of In Introduction to European Swords (1982). Donald J. La Rocca is with the Arms and Armour Department of the Metropolitan Museum of Art, and has authored The Academy of the Sword – Illustrated Fencing Books (2013) and The Gods of War: Sacred Imagery and the Decoration of Arms and Armor (1996).

North’s chapter, “Barbarians and Christians”, takes us along a timeline that explores Saxon and Viking cutting weapons and through what our community might consider to be “traditional medieval” cross-hilt swords. He briefly exposes us to the “cut versus thrust” conundrum that faced period fighters as steel was developed that could actually hold an edge or point, and how the concurrent development of body armour affected one’s choice of sword to take to the campaign. We also have a brief introduction to ceremonial swords, as the later medieval age now has the resources to allow for the smithing of non-functional, decorative weaponry.

LaRocca takes over with “The Renaissance Spirit”, taking us from the increasingly-thrust-dominated 15th century into concurrent developments in sword hilts and related decoration. By the time his 16th century notes come about, we’ve also been introduced to two-handed, more ceremonial, tournament (clipped and bated) and hunting swords and a whole sack full of dagger developments. It is in this chapter that we’re first acquainted with the “systematization” of swordplay with LaRocca’s introduction of Achille Marozzo’s work. (Of note, the earliest rapiers were not so much a civilian weapon as they were a late-15th century infantryman’s weapon of choice for use against his lightly armoured and agile opponents.) [2]

And North pens our last two chapters of HEMA interest.

“From Rapier to Smallsword” is a handsomely illustrated exploration of how the rapier developed in form, appearance and — if I may be so bold — “bling”. In this chapter, North explores the arch-typical 15th century gentleman’s weapon as it developed from previous “warfare” thrusting weapons, to the preferred civilian dueling weapon and ultimately its ending up as a fashion piece in its own right, before it was supplanted by the smaller, lighter and still very decorative small sword. And smallsword hilts were not only decorative, but potentially pricey as well … in 1717 a silver-plate hilt (not including the blade) might set you back $975 Canadian (equivalency). [3]

His “Seventeenth Century Europe” confirms that the cross-hilt is now for the most part gone from functional sword types, and he introduces new swords such as basket hilts and hangers and the omnipresent use of curved swords within most European cavalry units. And it is during this time that we’re first introduced to the standardisation of swords, at least for those serving in the military, and mass production begins to be able to turn out numbers of brass-hilted swords of a functional standard.

Coe’s book (North’s chapters?) is a snapshot of the appearance and basic function of blade developments. What it is not, is an introduction to sword use, techniques, and metallurgy. Nor does it cover the technical or social nuances to be found in blade development.

To that end, we still prefer our Withers book to use as a “catalogue” of sword development, but if I was going to introduce somebody to swords and their historical evolution, Coe’s could be my recommended go-to, cot-side book. Also, you can go to the Academie Duello’s Library and read their copy!

Quotes Out of Context

“It is paradoxical that the most successful sword in the classical era should have been developed by a people who were not swordsmen. The sword was never more than a secondary or back-up weapon for the Greeks.” [4]

“There are some interesting references to lost hangers in the newspapers of the 1670s — swords were often stolen or left in coaches or taverns.” [5]