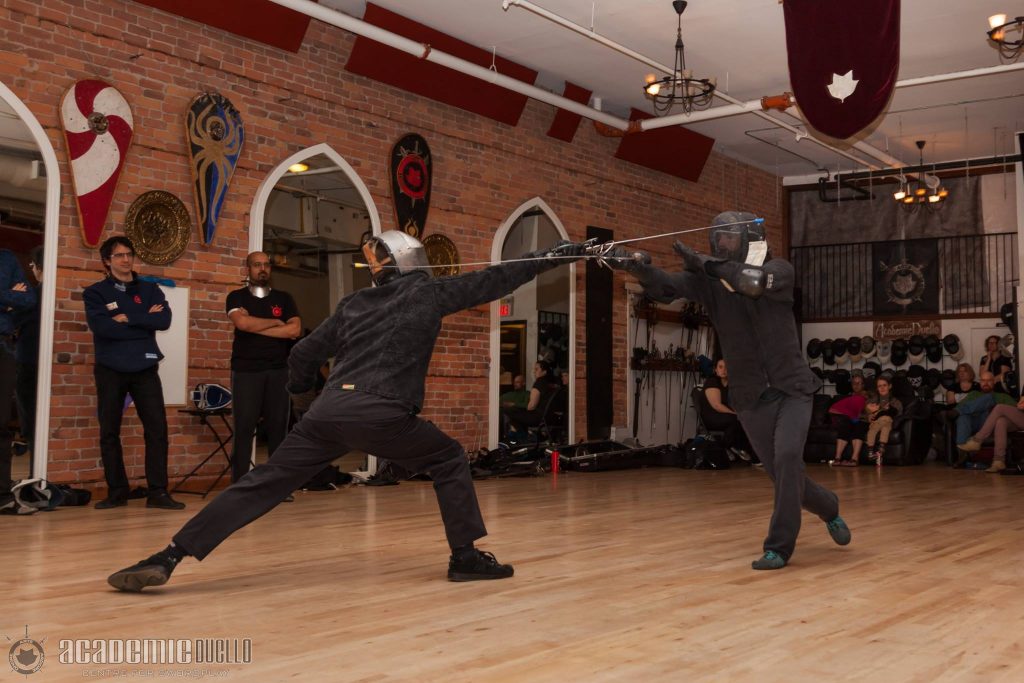 From June 3rd to 5th, Academie Duello will be hosting the first Vancouver Martial Challenge. This event is part of an alternative type of event I want to promote within the Historical European Martial Arts community: events that focus on combat within the realm of the martial art rather than the martial sport.

Here’s a caption from the event’s description about its goals:

Our focus for the weekend is to provide an environment that is as authentic to combat with sharp swords as possible. We believe having a focus on martial excellence, control, and personal challenge, versus scoring points or winning, allows participants to focus on bringing forward the best and most authentic aspects of their art.

I’m not against traditional sport tournaments. I have participated in literally hundreds, and as a martial artist I feel I have gained much from them. Especially in my understanding of timing, martial strategy, and psychology. However, I believe that having them as our only outlet limits a fuller understanding and expression of our arts. An environment that is focused on points, as necessarily a tournament is, requires development of a combative approach that maximizes point scoring, and thus leads to a far different expression of the art than the deadly form from the tradition.

Another excellent event that shares similar values is the Berlin Buckler Bouts, facilitated by groups Dimicator and Twerchhau in Germany, who will be going into their 8th Edition at the end of May. Here’s a caption from their event description about the sparring environment they want to create:

We expect an awareness for how sharp swords work. We will not be playing sword tag. All freeplay is considered a preparation for or a simulation of unarmoured combat with sharp swords. Because we believe that swords are precision tools, which is confirmed by practice with sharp blades, nobody is supposed to use his training sword like a club. We will not tolerate any forceful flailing, which we consider a misconception of historical sword-fighting in the first place. On the contrary, we very much appreciate if you would prefer to go slow, in order to learn the precision and control required for swordplay.

One of the things I love about the BBB is their focus on fencing with as little protective gear as possible and instead emphasizing control and fencing at appropriate speeds to provide safety. This type of safety, while maintaining martial intent, is difficult to create when competition for points is too greatly on everyone’s minds.

A group known as the Dog Brothers in the Filipino Martial Arts community made a similar move away from tournaments many years ago. Frustrated with what they felt was an inaccurate representation of Filipino Martial Arts derived from an exaggerated focus on point scoring and excessive protective gear, they began hosting “Gatherings”. These Gatherings are events that are both sparring weekends and martial challenges. Participants face one another in timed challenges where the primary goal is to fight well and survive. These events are also known for being pretty hard hitting, and there are certainly many who therefore feel they lose a sense of “true” mortality due to the fact that they still wear fencing masks. However, they achieve many of the positives from a tournament environment while maintaining much of “authentic” martiality that point-based tournaments lose.

What I like about the Dog Brothers’ Gatherings is that they also host specific challenges between people, styles, or disciplines. These non-scored encounters are still very important to their participants and they train hard before facing them. Yet at the end, there are no medals or standings, only the satisfaction that one gets from facing a personal challenge, and the learning that comes from testing your art.

If you’re interested to learn more about the Vancouver Martial Challenge, you can read the full event description on Facebook.

Are there any events that you have attended that you feel allow for a broader expression of martial art than we see in sporting tournaments? I’m interested to hear about them.