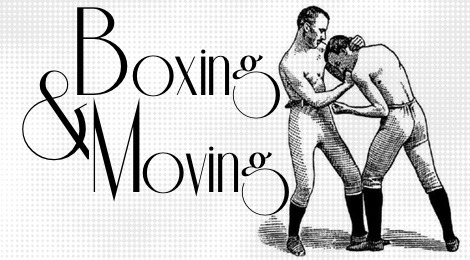 This week’s post is not about packing up and changing address, even though I will be going on vacation for two weeks. We’re going to take a quick look at movement in the sport of boxing and self-defence other than the straight lines presented in basic pugilism.

Some of this discussion is a reaction to a PDF handout posted to the Bartitsu Society entitled Boxing for Bartitsu: Moving Beyond The Straight Line, compiled by Peter Smallridge for the Basingstoke Bartitsu Irregulars. I recommend downloading and reading the short pamphlet.

If you need a brief refresher on the Academie Duello approach, read my post Pugilism in Bartitsu. Like Smallridge, our standard source texts are Boxing by R. G. Allanson-Winn as well as Scientific Boxing by James J. Corbett, the Art of Boxing by William Edwards, and others.

Bent-arm punches are only possible at close range, and I agree with Smallridge that when wrestling is an integral part of your boxing, as it was at the time, close punching is not as important. In modern sport boxing in which throws and holds are illegal, round punches are necessary at close range.

In self-defence, which is the goal of Bartitsu, grappling is necessary and usually the safer choice than punching and defending against punches. The main goal when at striking range is to get to jujitsu range and throw your assailant to the ground. Focusing on hooks and uppercuts may put you at risk of injury to your hands, and risk of your opponent getting behind you which puts you at considerable disadvantage.

Be careful with your hook if you aim for the jaw or other bony parts: your palm should be facing you, not down towards the floor. As we discussed in Punching: Vertical Fist or Horizontal, you risk breaking your little finger at the knuckle or within the hand if your hook is pronated, as Mike Tyson did.

Low hooks on the other hand are excellent for distracting your opponent and disrupting their alignment which can facilitate take-downs.

Although some boxing texts introduce blocks or parries immediately to defend against the straight punch, the distance at which pugilism should play allows the fighter to move offline and deliver a much faster reply. If the range is close enough for those hooks and uppercuts, guarding and throwing the opponent are your defensive options. However, at the range of the straight lead or cross, the slip is clearly superior.

I only need to clarify for my students that Smallridge refers to the head movement as a slip and the footwork as a side step, whereas in class I refer to the entire evasion to the side as a slip.

Like chess, one of the main strategies in boxing is to control the centre of the ring. One interpretation of the origin of the term “boxing” is to box-in your opponent to one corner so they have fewer movement options. Boxing should not be equated to fencing on a piste; like historical fencing, movement in every direction is permitted and is usually advantageous.

One note that I must repeat for those who have practiced longsword before boxing: the slip is not a triangle-step in which the rear leg is swept backward. That circular movement is excellent for swinging a sword around the body while slipping, and not as useful for throwing a straight punch.

For the next two weeks, you will not see my gold sash at Academie Duello because I will be in Italy. My assistant instructor Shawn Bullock will be leading classes with my lesson plans. Stay safe!