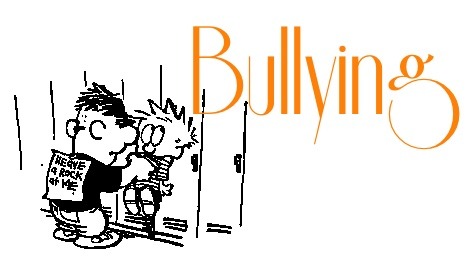 I just read a great article on Kotaku about the short series in Calvin and Hobbes that featured the bully Moe: http://kotaku.com/a-string-of-upsetting-calvin-hobbes-strips-told-a-bol-1777424191

So I wanted to connect this with those ruffians we train to defend ourselves against using Bartitsu. After all, a mugger is the adult version of the bully, and it would surprise no one to find out that a criminal who committed armed robbery was also a bully in their school days.

The Perpetrator and the Victim

In the comments on the article (which may have changed by the time you read it), a reader made the interesting observation that a bully who is accustomed to receiving violence at home will not only think that their abusive behaviour is normal, additionally he will be unperturbed if their victim fights back. Some people say that the bully is really a coward and picks on those weaker than themselves, so punching them in the nose will show them that you’re not the easy target they thought you were. But that’s too rational. The bully also has an ego to protect, and their self-image is tough. A challenge to that image will bring a lot of violence in reply.

The victim of bullying may also be accustomed to being on the receiving end of beatings and verbal abuse. They learn to be placid, “turn the other cheek”, and perhaps even believe that they deserve that kind of treatment. The psychological effects of violence, especially in childhood, echo throughout our lives and shape our reactions to loud noises, people frowning or disagreeing with us, and our valuation of people based on their height.

Coincidentally, this week’s Idea Channel was: What is Violence? As always, the content is dense and rich. (Is Idea Channel chocolate cake? Comment in the doobley-do.)

In Canadian Law, we have two crimes that are often connected: assault and battery. Battery is deliberate interference with another person’s body. Assault is the threat of harm. Normally, battery is accompanied by assault, so we get the phrase “assault and battery”.

Battery can happen without assault, as in the case of medical malpractice. An unnecessary or non-consented surgery or injection would be interference with someone’s body without any threats.

Assault can also happen without battery. For example, armed robbery contains assault without battery. So this is where our Canadian laws attempt to address bullying: the threat of immediate physical harm to get someone to change their behaviour.

Verbal threats are not enough to constitute assault. A physical gesture, the act of holding a potential weapon, or some other credibly threatening circumstance must be present. However, online threats constitute assault, as long as the victim fears imminent harm. I don’t know why our courts are not full of women responding to “gamer-gate” and other disgusting threats they receive daily since that precedent was established.

I’m not going to expound on this in a long scree, but you may have heard that the United States is known as the “indispensable nation” because of its overwhelming military force which alone can confront any enemy and can be deployed anywhere in the world. President Bill Clinton coined that term, and it is as true today as it was then. Fortunately, this concept is usually used in the context that the U.S. military power must be used responsibly, and to prevent genocides and other atrocities wherever they may arise.

Sadly, the justified use of violence remains humanity’s answer to all ethical questions. Is this the only way? Our police are armed not so much for their own protection, but for the compliance that a person can command through assault. That is, a credible threat of violence.

Superheroes to the Rescue!

And the slope gets slipperier when we consider that our biggest films are increasingly ones that feature superheroes. Despite filmmakers sometimes trying to problematize their vigilantism and their violent solutions to every offense, they are generally presented as our heroes.

“If only we had a Superman to make every criminal worldwide cower in fear instead of exploiting others!” we seem to cry. “Batman is taking matters into his own hands because the police and courts are corrupt. Thank goodness some of the super-rich are using their wealth to become private security forces using their great judgment to right the wrongs that society can’t handle through the justice system!”