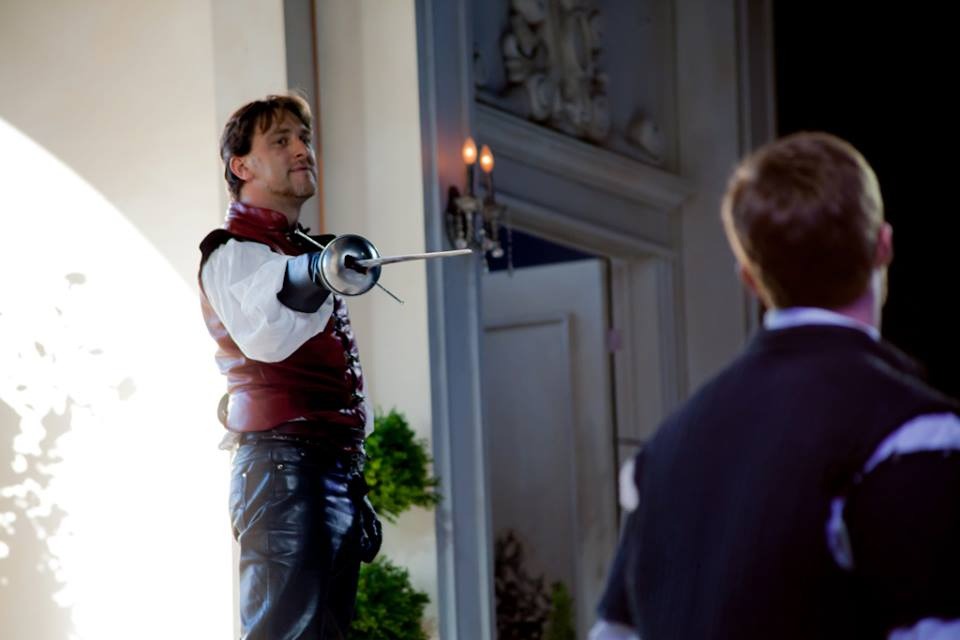 We’ve heard Fight Directors say some version of the following:

What does any of that mean?

The mentality and strategy of sword fighting largely remains the same across cultures. You will be portraying a character in a struggle, and it is important to convey the emotional and mental journey of the fight.

Acting the fight, and the audience connecting with your goals and actions, depends on your imagination and understanding of a sword fight.

You hold a deadly weapon in your hands, and you are facing an adversary with the same. Regardless of whether you’ve been forced into this situation or you sought it out, this moment is kill-or-be-killed.

A guarded stance will make you tough to hit, and provide opportunities to hit your opponent. However, if you’re hot-blooded, you may charge forward without guarding.

You may cut or thrust or use a combination, and you’ll mainly use your sword to defend yourself with parries as well. You’ll need to chase an opponent who moves away from you, and maintain balance to retreat or move off-line to save yourself.

In order to gain advantage, you’ll use some Preparations of Attack. Perhaps one of you will try to grab the other or resort to underhanded tricks.

In the end, you might disarm your foe, or one of you will be injured or killed.

Before you think about choreography, know that as soon as the conflict starts, one of you will die.

When we say “play the intention” of the move, it means that you must be thinking about the purpose of the motion, rather than just mechanically reproducing the motion.

In any attack, look at your target. This is one of the most important elements of focus that many fighters forget. Some stage combat teachers emphasize eye-contact, so actors think that they should lock eyes as much as possible. This is a major mistake, and can be dangerous. Always look at the specific target, be it the shoulder, the thigh, or the empty space after your partner ducked. It will keep your blade motion clean and safe, and shows the audience where your attention is.

For parries or any situation where your character is on the defensive, look at your partner’s shoulder of the weapon-arm. Your character is trying to see where the next attack will come from. Neither you as an actor, nor your character, can perceive the sword itself at high speed in time to react, but a “soft focus” on the shoulder will give you tons of information about your partner’s direction of action. It is also a great way to judge your measure (the correct distance to fight at).

Other motions can be broadly categorized as “preparations of attack”. The intention of a beat is to move the opponent’s blade aside to open a line of attack. You mustn’t beat without considering the next attacking action. If the beat is evaded, your character’s intention didn’t change: you thought you were going to attack, but now you’ve got to instantly change your plan. We must see that in your posture, and the frustration on your face.

Not every move is pregnant with high emotion, and not every change is catastrophic. But every moment has an intention, whether it is “kill”, “defend”, “get away”, “deceive”, etc.

As a fight choreographer, you should collaborate with your actors to understand their character intentions. Your script interpretation cannot override their acting choices, and you’ll save yourself a lot of grief by communicating why their character moves in a certain way or decides on particular fighting techniques.

Fight Director Jared Kirby has a simple 4-type categorization of fighters that can instantly give you insight:

Everyone thinks they belong in the first category, and no trained actor wants to be in the last category. You and your partner should pick different categories.

Other characteristics can come into play, so you should consider:

And those choices should change during once during the fight. Your first phrase sets up your initial fighting attitude, and the audience should understand it. Then there must be a change in one of your characteristics in a later phrase. That’s what they call a Character Journey.

You want more character in your combat? Try these simple tips:

And some things to avoid:

Watch movies with great fights, especially those with dialogue in the middle of the combat.

Watch boxing and MMA fights, looking for how they approach and when they try to escape. Observing fighters getting tired is very instructive.

The evening classes will continue, but with a performance focus instead of FDC curriculum. This time will be used by demo team members to get more stage combat training and rehearsal time for their choreographed fights. It will also be practice time for those in the FDC program. We will still practice fundamentals like knaps and falls and performance concerns, but you’ll be expected to get your sword fighting skills from Duello Mastery or Warrior programs, or FDC certification (past or current).

I hope this adjustment makes sense to you, but if you have any questions, please let me know.