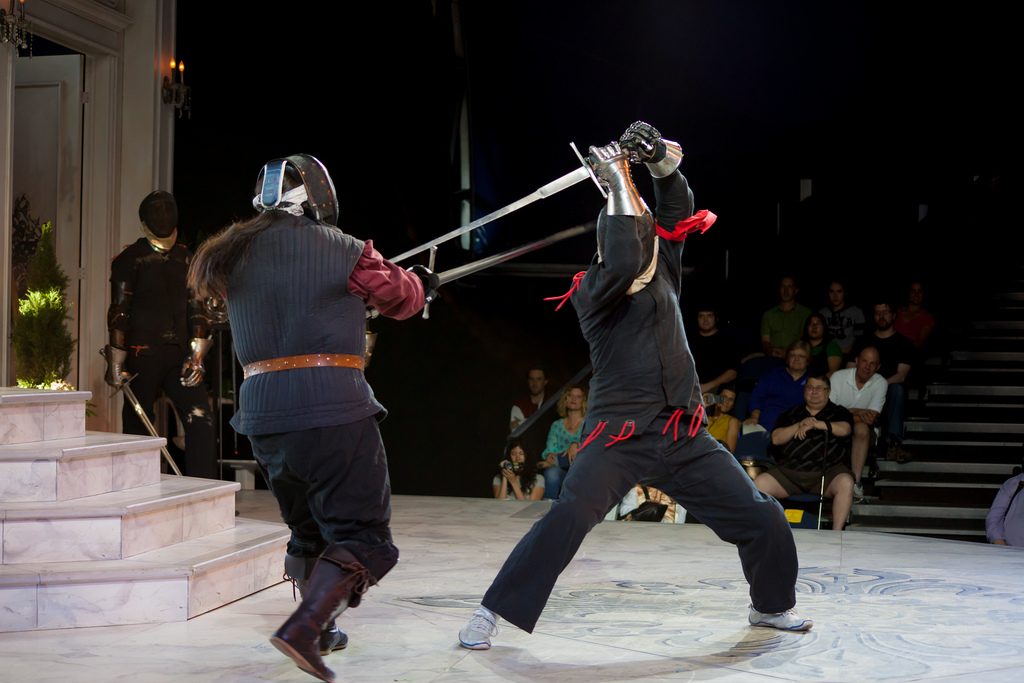 I remember a few years ago on a commute into Academie Duello I met a gentleman on the subway who was a researcher and player of Renaissance era music. Our conversation delved into the similarities of our two pursuits from the challenges of making modern interpretations from old written notations, to the changes the instruments we use, whether musical or martial, have faced in the years since those masters wrote their works.

Like swords, many Renaissance instruments have transformed significantly or completely fallen out of use over time. Many symphonies were composed with the Viol in mind, a precursor to the violin and cello that has a less crisp sound. Another challenge with stringed instrument music is that traditional catgut (actually sheep intestine) strings are also softer in tone than modern synthetic strings. Even modern methods for making catgut strings are different than many methods used for the orchestras who were originally performing, for example, Mozart’s music. Instruments also were poorly classified in musical notation. The Viol as an example has over 8 different varieties yet in most pieces the composer simply notes Viol even though this could refer to a Tenor Viol (essentially the size and similar in sound to a modern viola) to a Base Viol (which looks and sounds similar to a cello yet with much thicker base strings).

What I learned over the length of my discussion was that until historical music experts were able to first reliably identify instruments in notation and then either get enough originals or create a sufficient quantity of accurate reproduction instruments, their interpretive works of historical symphonies were off base and the sound potentially quite far from a composers original intention.

I expressed to my friend on the train that our modern resurgence of historical swordsmanship has had a similar struggle. We did not really get proper legs under us until we had readier access to good simulators and some better information about the weapons being described in the manuals. Using an epee to explore historical rapier, or a wooden waister to understand longsword really leaves a lot more to speculation than we want. With an inaccurate tool you miss most of the lessons the weapon itself has to share with you. We already have to pretend that we’re wounding one another, now you need to pretend that the weapons are acting and interacting in a way that they’re not in reality.

If you’re going to truly have a shot at understanding the 14th century combat art of Fiore Dei Liberi you’re going to need to use his weapon as much as a true exploration of historical music might require us to use Mozart’s violin.

Where things get challenging for modern sword fighters is that even with very good simulators we are still a far cry from a true combative environment. We are always going to make sacrifices for safety because at the end of the day we want to come out uninjured and with the same number of friends.

To really get as close to authentic swordplay as possible requires that we come at training and exploration of historical technique from several angles.

At Academie Duello we have two tenets that underpin our martial practice, guided by a desire to stay as close to real weapon technique as possible:

1. Proper Arms. We use accurate simulators that are modelled after historical artifacts and are weighted and balanced as appropriately as possible while keeping durability and safety in mind. This means we have always avoided synthetic simulators and focus on the use of steel swords at all levels of practice.

2. Proper Respect. We treat the simulators we use as being their deadly counterparts. Even though our general purpose training swords are not sharp, and we use protective gear to keep our vulnerable parts safe, we take extra care to respect the ways in which the deadly counter-parts of our weapons are deadly and in which ways they are not. We avoid treating our simulators as point scoring sticks at all costs.

Safety is essential to modern practice of any martial art. We want to be able to train with our friends and students on a regular basis without lengthy breaks for recovery. However having been down both the super-armouring path and the nearly no armour path, I have come to see that both have their pitfalls and I’m now inclined to move toward lighter gear rather than heavier.

Bulkier more protective gear does make you safer but often leads to irresponsible practice where people do not respect the deadliness of the weapons. “Feel free to hit my hands, I can’t really feel it anyway” type attitudes prevail quite easily. Heavier gear also impedes movement and in many ways control, leading potentially to other safety hazards.

Now the less gear you practice with the more respect and control is required of you and your training partners. I am not an advocate of crazy monkey sword fighting with no protective gear. I am however a fan of scaling speed exercises where practitioners begin with slow drills, move in to slow sparring, and gradually increase in speed as their control and precision develop.

The main challenge of this approach is that it takes longer for people to get to open ended sparring. Sparring is a ton of fun and we all want to do it, in fact its a very central part of our school. However it is worth teaching your students to respect and enjoy the art that they are practicing and to reinforce it as ‘an art’ and not simply as a modern sword fighting sport.

Roland has become a big advocate for practicing with sharps, as have many in our community including Guy Windsor, who made a special point of having all of his students at WMAW a few years ago try an exercise with him using sharp longswords (done slowly of course). The difference in feeling between the drill done with blunts and then with sharps was a real eye opener for students in the class — it was beautiful to watch.

Roland’s emphasis in his video is that many of the techniques represented in I.33 (the sword and buckler art he practices and teaches) don’t make as much sense until you can feel how two sharp edges bind with one another. Our blunt edges slide very easily along one another whereas a sharpened edge does not. Sharp blades stick edge to edge and this often causes the points of the weapons to rise upward in response to forward pressure. Orienting your edge along your opponent’s flat, or your flat to their edge in order to allow the blades to slip past each other, becomes an essential part of navigating a crossing of swords.

Now practicing with sharps obviously requires skill, experience, and a great deal of care and respect. There are artifacts that can come up here as well. You don’t actually want to stab your opponent. Some targets and placements might become off limits and thus may negatively effect how you position yourself as you increase your defence to valid targets and ignore those that are invalid. You may also lose elements of changing speed and plays that expel the sword as you take away certain aspects of speed and percussive play in the interests of safety.

I don’t advocate that anyone practice with sharps against a partner without lots of experience and a significant amount of control. There are certainly legal risks you may face in this kind of partner practice as well.

All that being said however, the education that sharp swords have given me even in solo work has been essential to my development as a practitioner. The small bit of extra material that is taken off the edge of a sharp sword, in contrast to a blunt, gives it a different feeling as it moves through the air, even alone, that is a recommended experience. Knowing how sharp swords bind is essential for further understanding technique, and using sharps to cut and thrust against targets and pieces of meat has taught me a lot about the ways in which swords are deadly and the ways in which they are not.

As I said at the start: We cannot use one single method to understand martial swordsmanship. We must come at it from a variety of angles. This is not simply a modern problem. Historical instructors struggled with this same challenge. They too did not want to die while teaching and practicing their art, yet they had a real reason not to become disconnected from the deadliness of their tools.

Whether your goal is authentic historical research or to be a modern practitioner of a martial art, keeping a mindful connection to the real context of that art is essential to authentic practice. Create a method for training that allows you and your fellow practitioners to stay as connected as possible to the beautiful and deadly art while allowing you to train safely for years to come.

I’m certain with the right instruments and the right attention, we can all make beautiful music.