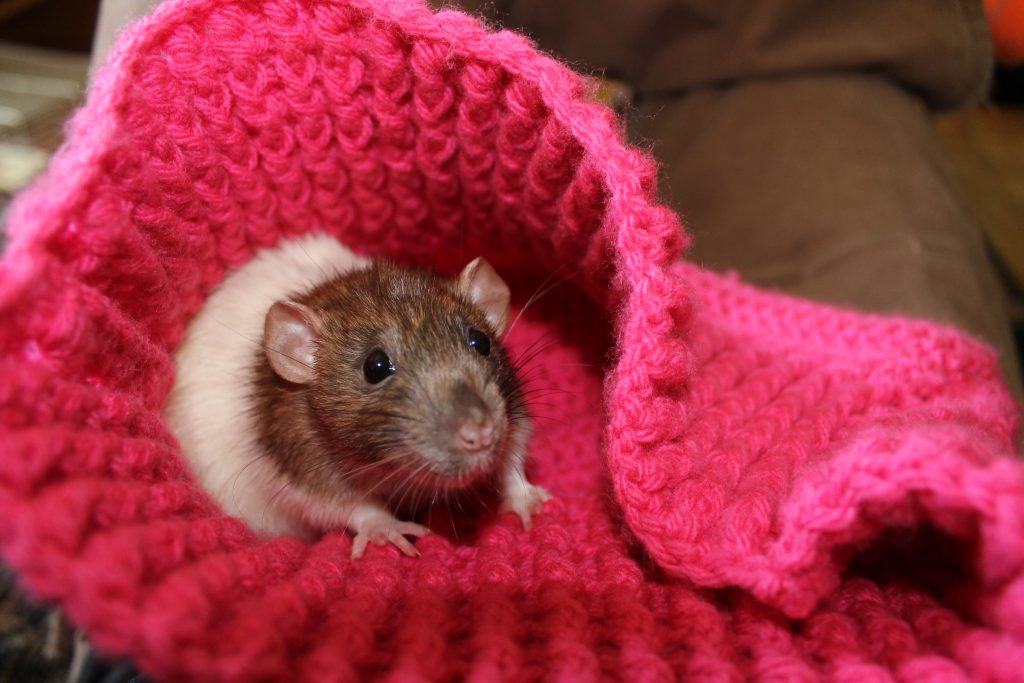 Meet Mr. Bumble. Mr. Bumble is scared of everything.

Mr. Bumble is a foster rat currently in my care. He was found living outside. Before we took him in he was a day away from becoming snake food (seriously!) and at some point in his adventures he broke a number of toes, so he was likely in a lot of pain. Mr. Bumble was probably dumped by his owner because he was unwanted which for most rats would be a death sentence. But Mr. Bumble is a survivor.

However, survival comes at a cost. This wee rat is anxious about everything. He is jumpy, hates being picked up, and spends most of his day hiding in the lining of his cage. I won’t physically remove him from the lining because it’s important he has a safe space that no one violates right now. He has a hardwired fear response.

I’ll bet no one is reading this and thinking “That Mr. Bumble guy is an idiot, he needs to get with the real world!”. At least I hope not, you monster.

But we don’t afford each other the same consideration.

Fear is the result of trauma. Anxiety, PTSD, and just plain old phobias are hard-wired survival responses. Mr. Bumble isn’t an idiot for being nervous, and no amount of me shouting at him that I am trustworthy will change his hard earned knowledge.  Partly because he’s a rat, and I don’t speak rat, but mainly because trust is not demanded, trust is earned. If people do not trust you it is either because of something that has happened to them and outside of your control, or you simply aren’t trustworthy, which is all on you.

This process, the one by which trauma becomes an anxiety or fear, or even PTSD is an intrinsic part of who we are and has kept us alive and kicking up until now. These issues may inhibit our happiness, but they do have our best interest at heart and they long predate the part of our brain that can rationalize our experiences.

This is not meant as a pep talk. The idea that such complex issues can be addressed by a conversation or a blog post is just an extension of the “buck up kiddo” attitude that wouldn’t work with Mr. Bumble, so won’t with the people in your life who are struggling right now.

Working with abused and neglected animals has taught me that on a fundamental level when someone is anxious, when someone is nervous, or when someone is struggling that you have to just make space for them to work through that. You can’t force them, nor should you want to. We cannot see fear as a weakness to be cast off if fear is something that is truly looking out for us. People don’t conquer their fears by ignoring them. They do so by facing them, little by little. Sometimes it looks like what Hollywood has told us facing fear looks like. Sometimes it just means leaving the house.

My point is this: Make space in your life for other people’s fears. Let them navigate trust with you as they see fit and respect their boundaries. None of you would expect Mr. Bumble to just decide to give up being afraid, so don’t expect it of others.*


As I write this Mr. Bumble has decided to leave the safety of my jacket for the first time on his own terms. He scampered about a bit on my lap and checked out everything and has now returned to the pee-soaked darkness (this is not a glamorous process). That’s enough adventuring for today.

* You may have realised by now that the title of this piece is misleading because it’s not really about conquering fear, but honestly, who could resist the chance to call an article that?