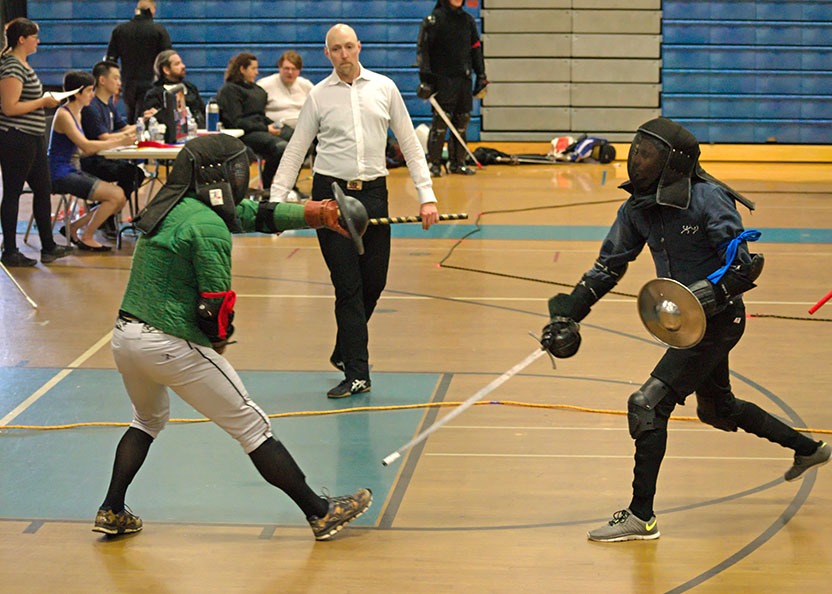 I had the pleasure this past weekend of being a judge, ring director, and instructor at Lord Baltimore’s Challenge in Washington, DC, an event put on by David Biggs and a large crew of people from diverse groups such as Maryland KDF, Virginia Academy of Fencing, and the DC-area SCA chapters. David’s goals with the event were to:

I’m still processing the end of the event but I think overall the objectives were largely met and David and his team deserve a hearty congratulations for running such a successful event, especially first time out of the gate.

There was a lot of clean and technical fighting, particularly in the rapier and dagger and sidesword alone tournaments. David sought to bring in a judging team who had a lot of experience with rapier and sidesword that included myself, David Coblentz, Kevin Murakoshi, and Puck Curtis. Having experienced fight directors and judges (we all played both roles, though mainly directing) helped keep things running smoothly and I think largely helped with the quality of the blow calling.

David also emphasized self-calling of blows (a convention that we use at Academie Duello and is the norm in the SCA). In my pools, many people called blows that were difficult for the judges to see that they felt had been missed (against themselves only) and called back blows they felt were miscalled or landed poorly. I think the combination of judging and self-calling worked quite well. The judging helped provide an impartial witness and clarity and created an environment of accountability on the fighters. The emphasis on self-calling meant there was a greater emphasis on individual fighter satisfaction and took a bit of load off of the judging team (though they were always the final decision).

It is interesting to me how far SCA and HEMA have drifted from one another and how two groups who are seeking much of the same ends are rarely in the same place (particularly in rapier and sidesword). The experience and depth of rapier fighting is still generally higher in the SCA with a few notable exceptions.

HEMA rapier in a lot of places is still developing in precision. Figuring out the equipment and how to stop those who try to charge in and grapple (i.e. disengage and let them run onto your point) has a ways to go. I think some of this will also be helped as judging teams build more experience with the weapons and how to view the action.

The more experienced SCA fencers, though not always historically focused, were precise, well timed, and savvy, I think this brought up the level of performance of everyone in the tournament regardless of their background. Kudos to all in this regard. I look forward to seeing more intermingling between these groups.

I taught three workshops on Sunday morning, back to back, and then headed off immediately to fly back to Vancouver, so I can only speak to them. They were largely full with between 25 and 40 participants in each. I covered:

As usual, I covered a lot of material in a very packed in space of time (each workshop was only 90-minutes long) and I am impressed with how well my students kept up throughout. A large part of my emphasis was on how to be an excellent drill partner that both encourages and challenges the person across from them to execute the technique to the best of their ability. I can be an exacting and demanding instructor and I felt that students both new and experienced rose to that challenge. Thank you everyone for being there and responding well to my pressure to bring up the excellence in your fighting.

I’m already looking forward to being back in the DC area for the DC HEMA Open in February 2019 where I’ll be again teaching. Thanks to David, Lisa, my teaching, directing, and judging partners, and all my friends new and old. Great event and well done!