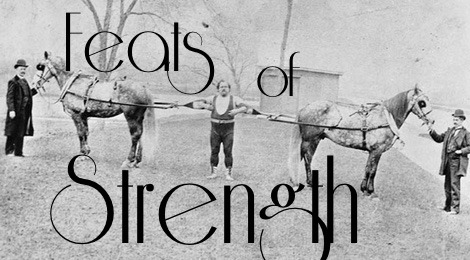 During my physical culture workshop at VISS last weekend, we looked at a few feats of strength. Some of these might be thought of as cheating, others are outright stage illusions.

First up, classic feats from the Bartitsu Compendium I, in a section called “How to Pose as a Strongman”.

1. Using a chair for leverage

2. Resisting a push into the wall

My favourite part is Barton-Wright’s advice in the last line: “…when the ordeal is over, try to assume as pleasant a look as possible.”

I wanted to explore the following tricks from Scam School, but we ran out of time. Many of these have a true version in which massive overall strength and especially grip strength are necessary. They also have fake versions that are mostly illusion. Most of those feats require props, so you’ll have to set up your staging ahead of time.

Here’s a video that contains four real feats and how to do the fake versions:

1. The Human Link/Tug of War: Watch as Dennis Rogers legitimately uses his grip strength to take on two pullers in a game of tug-of-war…then see how Brian fakes his way to the same feat.

2. Fists of Fury: Learn a simple contest of strength that you’ll ALWAYS be able to win

3. A review of pushing into the wall.

4. A bonus feat that you’ll have to watch the video to see for yourself!

Be a Strongman and Learn Four Feats of Strength!

In this video, they look at bending frying pans and unbending a horseshoe:

How to Bend a Thick Nail or Wrench with Your Bare Hands!

When it comes to contests of strength, arm wrestling has endured the test of time. Whether it’s the genetically-enhanced Fly, or the otherwise-enhanced Stallone in Over the Top:

Here’s some tips on winning your next arm-wrestling match, which I suppose can be considered a kind of modern duel:

How to Win at Arm Wrestling

How is this Bartitsu?

It’s all about leverage, which is the easiest form of mechanical advantage. Whether arm-wrestling, extending your grip to bend objects, or pushing in a direction that gives you better angular momentum than your opponent, you can achieve amazing results with an understanding of simple mechanics and how your body expresses force. Fighting a stronger opponent uses the same scientific methods, which you can master every week in Bartitsu class.