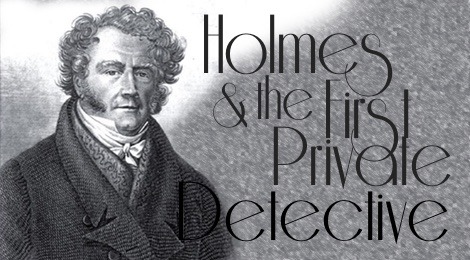 Bartitsu owes a lot to the stories about Sherlock Holmes written by Sir Arthur Conan Doyle. Holmes is described as practicing Bartitsu, and makes use of that combat skill in several confrontations. The popularity of the series spread the fame of Bartitsu at the time, but more important is that their longevity was the only reason Bartitsu was rediscovered a century later and revived by Academie Duello among others.

Sherlock Holmes was described by his author as being “the world’s only consulting detective.” He meant that all other detectives worked for the police. Today, we call his job a private investigator or private detective. Those are still dangerous jobs and self-defense on the job is as important today as it was then.

Although Holmes is a fictional character, was the claim nevertheless true? Was Holmes the first consulting detective?

Historically, the first private detective may have been François-Eugène Vidocq, a French criminal who aided the police in solving crimes using his innovations of footprint evidence, crime labs to analyze evidence including ballistics, and kept a criminal database of known felons, their physical descriptions and modus operandi.

Sherlock Holmes was not based on this man directly. The primary influence on the character of Holmes is Dr. Joseph Bell, who was Sir Arthur Conan Doyle’s mentor. However, our favourite fictional detective is a composite of several different men, and his ability to solve crimes immediately upon seeing a crime scene is purportedly what Vidocq was known for.

As a child, Vidocq ran away from home to join the circus, and landed in jail several times. His crimes started with petty theft, then escalated to deserting the army, using false papers and authorizations, and other forms of fraud. He travelled in disguise (once as a nun), but was often tipped off to the police by mistresses and former criminal associates.

In 1809, tired of living in fear, he surrendered to the police on the condition that he could help them catch fugitives. At first, they used him as a spy in a penitentiary, so he was confined to prison while earning the trust of the authorities and gaining information from other inmates. After his release he investigated crimes at first through his criminal contacts, and then through his pioneering use of careful crime scene investigation and under-cover work. The police gave him a support staff until Napoleon decreed that the unit be expanded as a national crime department.

Vidocq wrote memoirs that may have embellished some of his undertakings, so if you’re interested in this brilliant detective, get your hands on his book, Memoirs of Vidocq. There was a film starring Gérard Depardieu in 2001 called Vidocq. Although based on the historical figure, the film transforms his story into a stylish magical fantasy. Here is the English-language trailer:

This post was inspired by this video by the humour website Cracked. So if you only have 2 minutes for your research, play this: