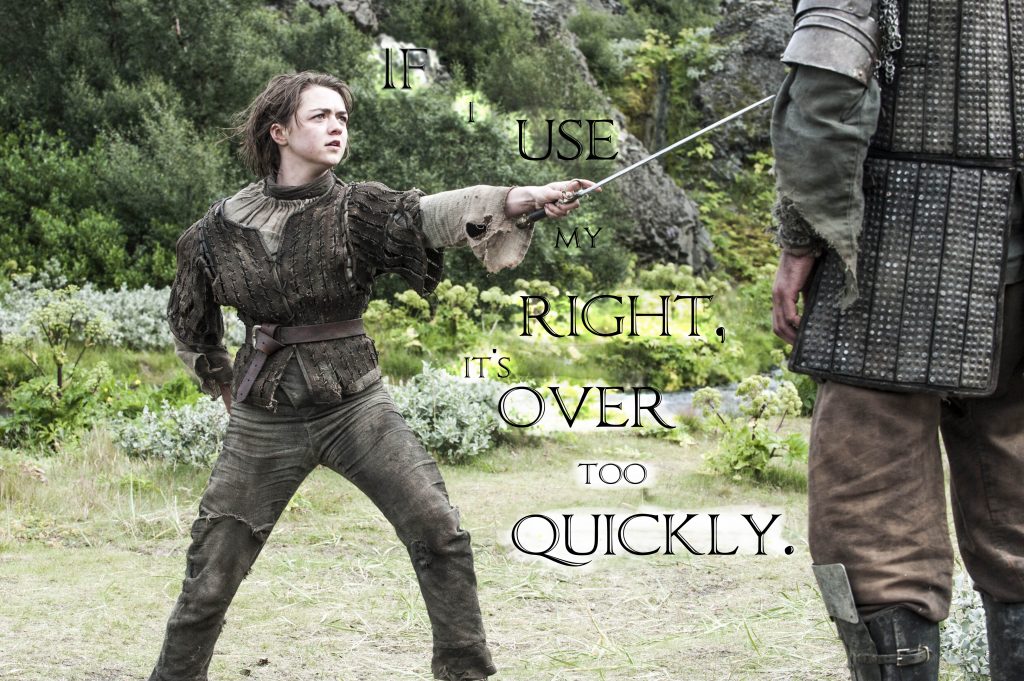 Are you left-handed in a world of right-handed sword fighters? Or perhaps like Maisie Williams, who plays Arya Stark on Game of Thrones, you are right-handed but cast to play a left-handed character. Should your stage combat training include ambidexterity?

Why Are You Smiling?

I just read this interview with Maisie Williams (Arya Stark) about who she thinks should sit on the Iron Throne in the end, and her challenges on the show:

Parade.com: Maisie Williams On Who Should Win the Iron Throne

One interesting paragraph jumped off the page: “The hardest thing was to do everything left handed. My character in the book is written left handed and I learned all of my sword training left handed. It’s been difficult, but I think I was very eager and determined.”

Because I Know Something You Don’t Know

When learning true martial arts, it makes a big difference whether you’re facing someone who is holding their weapon in the left or right hand. However, in stage combat this should not bother you, except for during a few types of moves. Your parries and attacks should be equally good on your inside or outside, and most blade interactions such as beats and binds will operate without any modifications. Getting into close fighting (corps-a-corps) is a little tricky, since one of you will bring your hilt across and crossing your arms in that position can be difficult. But once you figure out the best crossing of your swords, it isn’t a safety issue.

In other words, if the script doesn’t refer to handedness, a naturally left-handed person should learn to sword fight with their left, and right-handed actors should learn with their right. It will lead to faster mastery and less frustration in performance.

Some new students are frustrated because of a misunderstanding of parry designations, which leads to a memorization error. The parry numbers should not be thought of as left-side or right-side, but to the inside or outside lines. Prime, for example, is a parry for the inside low line (opposite to the sword hand). In this way, your attacks and defences will match your partner’s expectations because your memorization will depend on which hand their sword is in, rather than a self-oriented focus on your left or right side.

There’s Something I Ought To Tell You

The off-hand comes into play even at the Basic Actor-Combatant level because it’s important for balance and a certain amount of character style. That means that a right-handed fighter must be aware of keeping the left hand active and doing appropriate actions even while most of your focus is on what your sword arm is doing.

Your non-dominant hand is even more important if you need to perform with two weapons. At the Intermediate level in Fight Directors Canada, one of your classes is rapier and dagger, in which you’ll defend yourself with a dagger in your off-hand. At the Advanced level, broadsword and shield and rapier with other companions will test this skill even more.

If you start early with left-hand awareness and occasionally practice with your off-hand, you’ll be better prepared for these weapon styles.

I’m Not Left Handed, Either

In our Mastery Program at Academie Duello, students are expected to change hands whenever one arm gets tired so that training can continue uninterrupted. That way, you’ll learn ambidexterity and both arms will develop in strength and coordination. In our stage combat program, I encourage students to learn to be excellent on their dominant side before trying their non-dominant hand. In most cases, as I mentioned above, the script will not mention handedness.

When looking for a scene for your certification test, I would stay away from the Princess Bride duel, since it has two elements that are very difficult at the Basic level: speaking while fighting (not just in phrase breaks) and fighting with both hands expertly.

Our next certification course is scheduled for October 2015, so actors should set aside two weeks for an intensive stage combat experience and an opportunity to put an industry-standard certification on their resume.