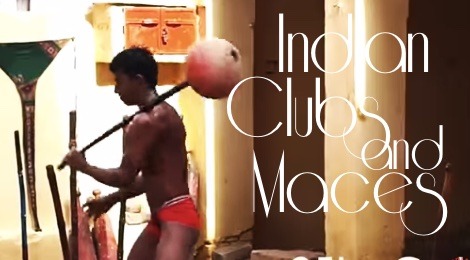 If you enjoy training with Indian clubs but you’d like some more variety and challenge, the next stage is the Gada mace.

The two-handed grip for the “360” is more common among Western enthusiasts, and a great place to start to learn control of the swinging weight. The exercise is great for the shoulders and grip strength, and all angles of the core are used to stabilize the body.

In the video, he uses only the single-hand grip as he increases weight. The Bartitsuka should instantly recognize how this motion is perfect for developing a strong walking stick strike.

There are other movements to explore with the Gada mace, and once you’ve mastered the 360 with two hands and single-handed, check out this article at Art of Manliness: Train Like an Ancient Hindu Warrior.

At Academie Duello, we have Indian clubs ranging from 1 lb to 10 lbs. We also have a training manual in the library called the Handbook of Authentic Indian Club Swinging.

On Friday, 24 April, we held a rank exam at Academie Duello, and Winston Ho earned his Blue Sash through demonstration and sparring. Congratulate him when you see him next.

Next week begins another round of Fight Like Sherlock Holmes, our introductory Bartitsu series. Join us Monday or Wednesday 8pm-10pm or Saturday 2pm-4pm to learn the fundamentals of fighting like a gentleman with a Victorian blend of jujitsu, boxing, savate and walking stick for self-defence.