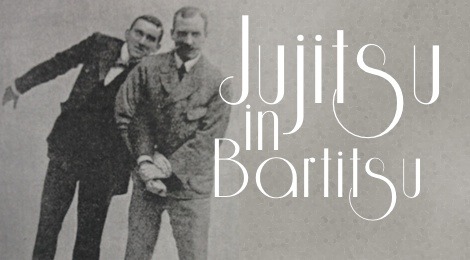 In 1898, E.W. Barton-Wright combined his own name with the term “jujitsu” to describe his new hybrid self-defense system: Bartitsu, the first martial art to combine Asian and European fighting styles.

Over a century since its creation, many people recognize immediately that Bartitsu is known for cane fighting and that Sherlock Holmes stories feature his pugilism. However, is jujitsu really a central focus of Bartitsu? How does it relate to other modern jujitsu schools? And why is our first lesson in our Fight Like Sherlock Holmes classes on jujitsu? Can’t we just skip to the stick fighting?

The answer is that Bartitsu borrows many things from jujitsu, including its definitions, its theories, and its practical application. In this article I plan to outline these commonalities and then explain how we have designed our Bartitsu program’s curriculum to reflect both the intent and spirit behind Barton-Wright’s mixed martial art.

Barton-Wright described the principle of effective action like so: “To disturb the equilibrium of your assailant. To surprise him before he has time to regain his balance and use his strength. If necessary to subject the joints of any parts of his body, whether neck, shoulder, elbow, wrist, back, knee, ankle, etc. to strains that they are anatomically and mechanically unable to resist.”

For comparison, here is a traditional definition of jujitsu offered by Sensei Takahiko Ohtsuka, quoted in Japan’s Ultimate Martial Art: Jujitsu Before 1882 by Darrell Max Craig:

Jujitsu literally means, technique or art (that is, jitsu) of suppleness, flexibility, pliancy, or gentleness (that is, all renditions of the ideogram ju).” All these terms, however, represent a single principle, a general way of applying a technique of using the human body as a weapon in unarmed combat.

It is also important to distinguish the traditional jujitsu that Barton-Wright learned in Japan from the modern Brazilian Jujitsu (BJJ) that is taught in mixed martial arts (MMA) clubs and seen in Ultimate Fighting contests. The main “breakthrough” of BJJ is that most fights end on the ground, and that in no-holds-barred competition an expert in ground submissions will tend to win against those trained in striking. That theory is clearly a winner in MMA, but that should not be seen as proof that it is good self-defense in a street fight.

In a street fight, there are two factors that make going to the ground a bad idea:

Therefore, our main goal in Bartitsu is to control and throw the assailant to the ground while remaining standing or crouched.

Sometimes fights start close, and our goal is to end them by felling the assailant, which means we intend to end close.

In a real-world encounter, it is rare for both fighters to take a fighting stance at a long distance and gradually move into striking range. It is far more likely that an agitated person gets closer and closer, while the other party tries to avoid a fight. The first violent act may be a grab or a punch (or both) at close range. It is an important foundation to deal with grabs, pushes and pulls because that is where domestic violence and other fights begin.

At the other end of the fight (which is hopefully soon after it begins), the Bartitsuka knows that a punch or kick is not likely to stop the larger and more aggressive opponent. Only by throwing them to the ground will they get the opportunity to escape.

Leverage and mechanical advantage are important concepts if the average person stands a chance against a larger, stronger and more aggressive assailant. The principles of simple machines are what Barton-Wright referred to when he said: “The system has been carefully and scientifically planned; its principle may be summed up in a sound knowledge of balance and leverage as applied to human anatomy.”

Here is a video that explains leverage and how it is used within the human body:

Lever systems in the human body

All joints operate because the muscles attach across a fulcrum (the joint or spot where two bones meet) and the force created by the muscle moves one or both bones. All joints have a limited range of motion and when moved by an outside force beyond that limit, there are three possible results, in order of likelihood:

Whatever the physical result, it may or may not be accompanied by pain. In other words, we do not rely on a pain response to get our results. We rely on the mechanics of leverage across a joint to apply a force greater than the joint can withstand, with the goal of controlling the opponent’s body, preferably towards the floor. If the opponent has a painful reaction, they will react faster, but it is not necessary, and the pain reaction may be dulled by drugs in their system or simple anatomical differences.

In order to avoid falling, the center of mass of the body must remain between the feet on the ground, or balanced over one foot. The simplest way to effect a takedown is to create a change in alignment so that the opponent is leaning their weight forwards or backwards. They will want to take a step to regain their balance. Moving faster than they can adjust, or preventing that adjustment by blocking or tripping the leg, will lead to a fall.

Throws which lift the opponent off the ground accomplish this by definition. However, throws against heavier opponents require a mastery of surprise and timing, and are unlikely to work in a street fight. Therefore, we reserve throws for a higher level of practice at Academie Duello.

Now that we have discussed the evidence for the close relationship between jujitsu and Bartitsu, here is a list of all of the jujitsu-related techniques that you will need to have signed off in order to advance within the Bartitsu curriculum at Academie Duello. In doing so, we aim to honour the intent behind this historical and effective hybrid martial art.

Join us for ongoing training in Bartitsu by signing up for the introductory course “Fight Like Sherlock Holmes” at Academie Duello. The first class will feature the jujitsu concepts that we talked about today, and the practical skills to apply it. A new round starts every month, and you can choose a section that fits your schedule: Mondays or Wednesdays from 8:00 -- 10:00 p.m. or Saturdays from  2:00 p.m. -- 4:00 p.m.

This is part 1 of a series on Bartitsu’s Component Arts. Come back in 2 weeks for part 2!