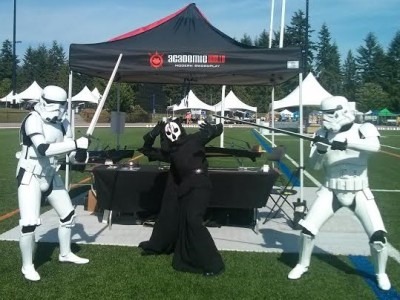 Okay, so everyone got up in arms about the lightsaber with a crossguard from the new Star Wars: The Force Awakens movie set to release this week. The lightsaber, wielded in the trailers by villain Kylo Ren, has spurred a number of arguments — most of which fell directly into either the “love it” or “hate it” category, with only anecdotal assumptions used to back them up. (Though some people did actually go out and do some research, including some from the HEMA community — see this great video using giant quillons and paint):

The fact is, there’s a huge amount of variation between lightsabers in the Star Wars universe, particularly when you include the expanded universe, which has a wide array of differing light saber-y weapons, ranging from the badass double-ended blade wielded by Darth Maul in Episode One to the rather bizarre and kind of psycho-sexual Light Whip of the comics.

But a lot of the arguments work on the assumption that the lightsaber is a sword, and is used as a sword would be. But what if we’re wrong, and the name is a little bit of a misnomer? (Because let’s face it, it ain’t a sabre, and that’s for sure.)

Certainly, the lightsaber has some characteristics similar to a sword. For instance, it is a weapon capable of cutting and thrusting, with a defined blade and handle, and nearly every fight in the movies demonstrates that it can bind like a sword. (A lesser-known fact about sharp swords is that when they interact edge-on-edge, they bite and stick a little, something that is very hard to replicate with blunt swords, and is therefore not even necessarily well-known even within the swordfighting community). But it is also missing some of the defining qualities that make swords, well, swords.

For example, although hilt, handle and guard size and design vary wildly from place to place and era to era, generally swords have an edge — though the edge may or may not be sharpened for its full length. This means that swords are generally used on single plane, and can only cut things which they intercept on that plane. A lightsaber, however, can cut in any direction using any surface of the blade regardless of the mechanics of the attack, and does not require good cutting mechanics, or anything other than a touch, because it will cut regardless — as long as it can make contact.

In this way, arguably, the lightsaber is not a sword, or at least will allow you to do a bunch of things that you can do with other weapons, many of which are relatively unique.

For example, a lightsaber facilitates hitting with everything that is not the “edge”. This is present in a lot of styles of Filipino close fighting (Corto) with the stick, where the front and back, both sides, and the tip are used to facilitate whipping or wrapping strikes. You can see this here:

This is particularly interesting when you consider that power generation is relatively unimportant for a lightsaber, so many more unorthodox angles of attack become viable.

However, there are things that you can do with a sword that you cannot do with a lightsaber. Unlike a sword, which with proper technique you can grip the blade with no injury (seriously, check this video out), lightsabers will cut if simply placed on a surface. This kind of implies three things:

One last factor: the blade on a lightsaber can be deactivated and have the length altered by its wielder. This is something that only really happens with retractable weapons like collapsible batons, and even then, it can’t be done willy-nilly to your advantage mid-strike. This opens up a wealth of tricks and rather mean tactics that are really only possible with a lightsaber. Add the force into this mix and you have a weapon like no other that some enterprising people have put together techniques for using many of the unique qualities I have discussed. You can find this here.

I guess the point I am trying to make here is that the lightsaber is not a sword. Neither is it really a stick, nor is it a club, or anything else that we have a real-world version of. So what is a lightsaber?

And maybe, with that in mind, the arguments about the crossguard on Kylo Ren’s saber become a little obsolete, whether they range from the well-thought-out to the downright obnoxious. (Let’s face it, we all know one of those people; we are talking about arguing online.) Possibly, they will fulfill some as of yet unknown function that is specific to lightsabers. Maybe they’ll behave like a crossguard on a medieval longsword. Maybe they are vents. We’ll have to watch the film to find out.

I believe there is a huge benefit to examining your art through a fantastical lens, and most certainly the discussion of these crossguards has been an entertaining one. There is a lot to be learned about what we do through playing mental games of “what if?” and challenging our preconceived notions regarding how things work, even if the scenario itself is rather out there. As martial artists, it’s also worth remembering that no matter how downright crazy the question is, if it brings one person to their local HEMA club to find an answer, then that’s a good thing.