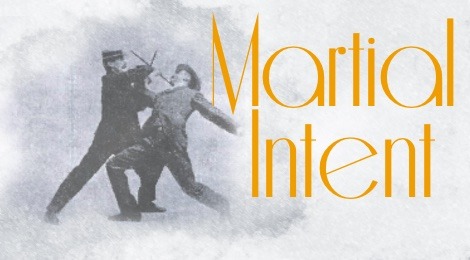 At our rank exams, we evaluate students by how they demonstrate certain techniques alone and against a partner, as well as their use in sparring. Many students are most nervous about the competitive aspect and not being able to plan exactly what will happen in the sparring component.

However, I see more students get reduced grades because they lack intensity and momentum when demonstrating with a cooperative partner, and especially when demonstrating their techniques solo. So today, we’re going to explore martial intent, warrior spirit, and imagining the real fight.

You may be thinking that this type of discussion belongs in my stage combat blog. Perhaps my background in fight choreography causes me to judge martial artists too harshly because I think there’s a performance aspect missing?

In martial arts, especially those that use solo forms, developing the precision of action is only half of the training. The other half is composed of all the emotional and mental aspects that make classroom learning relevant to the battlefield.

Some arts emphasize breath control, including a martial yell (or “kiai”, in Japanese). Other arts use physical conditioning to the point of exhaustion to keep the student fighting their fatigue to perform well. But regardless of the approach, the teacher’s aim is to ensure that the student is truly preparing to fight rather than dance.

The kata in Japanese arts such as karate or solo work (called “forms” in many martial arts) are all supposed to be exercises to practice the movements of the martial art in a specific order. Some instructors frame this as “a fight against multiple invisible opponents.” It’s important that your solo work, whether it’s a formal kata or just a drill of the same technique over and over again, is done with a visualization of how it’s affecting your invisible assailant. You can start slowly, but develop the habit of putting your full power into your solo work. It’s not a real punch until you can deliver it fast.

In class, we have to begin at a slow pace. That way, you can feel safe that you won’t overextend yourself and cause a muscle strain or joint damage. Going slow with a partner gives you the confidence not to flinch and the time to choose the correct response, especially when learning a technique for the first time. So going slow is the best way to start.

But you mustn’t keep yourself to a slow practice. If you’ve got the right technique, then solo work should be done with high intensity, and you won’t hurt yourself. When working with a partner, start slow, then ramp up the speed. When you start to lose precision, then you’ve found your maximum. You could try to go faster, but you’ll just make more mistakes, and that might be dangerous for your training partner.

Hip throws, which we begin at the blue sash level, are sometimes difficult to do slowly. You shouldn’t have to lift your partner, so much as use their momentum to go over your properly aligned hips. If there’s no momentum because you’re going too slow, then the throw becomes difficult if not impossible.

When it comes to joint locks, it’s important not to use a jerking motion, accelerating the motion, because you don’t know where your training partner’s limit is. Your intent in a joint lock does not need to be speed, but that the assailant gradually gives you more resistance or a tighter grip. This will not only improve your understanding of the correct technique, but also use the correct amount and direction of force to execute it for real.

Your training with intensity will lead to greater martial ability when a real-world danger comes up. When you use your class time to develop real speed, you’ll be more able to surprise your opponent, which is often more important than overpowering them.

The intent to hit and the understanding of the effects of a strike to certain parts of the body through visualization will mean that you’re not surprised when you have to deliver those strikes.

Power and momentum are not generated though mere body mass. If the larger man’s fist is a hammer, the smaller woman’s fist can be an axe. But only with bodily coordination and real intent will either be a useful tool.

Last night, we held a Bartitsu rank exam at Academie Duello, and welcome Victoria Liu to the level of Scholar, so she will be wearing the blue sash from now on!

A new cycle of Bartitsu classes begins this month. Join us for a free lesson or sign up for our full beginner’s course online today! Classes begin on Wednesday, March 9th and Saturday, March 12th.