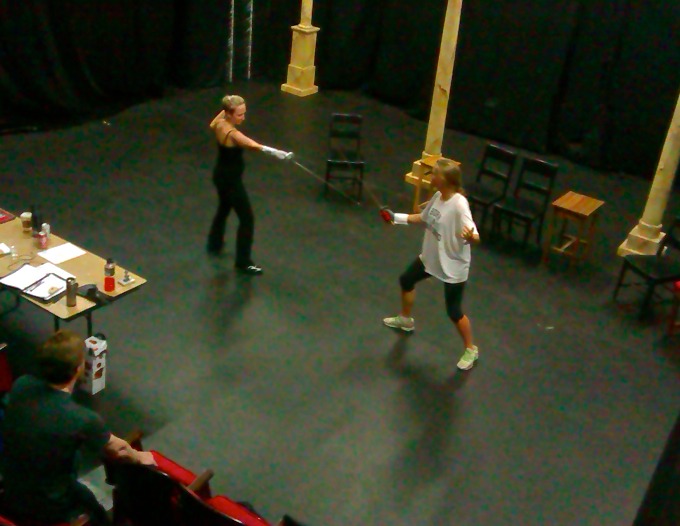 Fight scenes are undeniably complex and require a lot of rehearsal. Sword fights involve moving long metal objects at high speed toward another actor and demand sufficient time to ensure both partners are safe and accurate. How much time should a producer or stage manager set aside for these rehearsals?

A Fight Directors Canada course for actors (Basic/Intermediate/Advanced Actor-Combatant) will require 20 hours per weapon. This is an excellent standard for a fight scene, because the evaluation at the end of the course is the performance of a fight scene with each weapon. The fight scene is a 3-5 minute fight, and uses published plays, so it is a perfect analogue to the process within a theatre if the actors had never had stage combat training in that weapon.

Every instructor approaches the required material in different ways, but I try to split the time into three parts:

One way that a director can budget their time is to ask for each fight scene:

An actor taking an FDC course has the sole focus of passing the test by performing a fight scene under the tutelage of a certified expert. After 20 hours of training (and extra hours outside of class), many fail because of a safety violation, or because the fight was too slow or otherwise unconvincing. Should your production expect exciting fights with less?

Does the length or complexity of the fight matter? Will the Tybalt-Mercutio fight require more or less rehearsal than the Romeo-Paris fight?

I have heard a simple answer might be: Rehearse 10 hours for every minute of fight. But where does that number come from? It’s an extension of a general performance rule: 1 minute of performance = 1 hour of rehearsal. It is expanded because fights need to be fast, accurate and safe.

I think it’s pretty dubious to estimate rehearsal time from the length of the fight. If you’ve ever said, “It’s a short fight, about 1 minute,” I want you to take out a stopwatch and do jumping jacks for exactly one minute.

So, let’s say it’s a truly short fight at twelve seconds. Do we assign one two-hour session and never touch it again?

Furthermore, using this rule completely ignores the training and competence of your performers and the difficulty of the weapon. A choke might take up five seconds of struggle, but you could perform ten sword attacks in that time. Do they require the same rehearsal time? Sometimes the set or environment is challenging. If the characters have to speak during the action, that takes extra time.

Naturally, if we want the fights to be great, we should spend as much time rehearsing them as possible. However, we are constrained by the production’s budget and working around other rehearsals. Every fight choreographer faces the inevitable challenge of actor availability.

If fight rehearsals can start concurrent with the first blocking rehearsals for a show, and keep a pace of at least one session (2-4 hours) per fight per week, there is a good chance the fights will be excellent.

Each feature fight typically requires at least two sessions of 4-hours each, except for one-move fights such as a slap, a fall, or other single-move fights. A production of Romeo & Juliet typically involves:

Therefore, they can expect three or four sessions of four hours for learning and choreography, and then double that for safety and polishing the movements to performance speed.

On the other hand, Hamlet has one major duel at the end, with only incidental violence peppered in elsewhere. So, the minimum rehearsal time would be two sessions of four hours for a basic fight. As the climax of the show in which everybody dies, though, I’d definitely invest in more than the minimum.

If you’re an actor who wants to become an action hero, sign up for our Fight Directors Canada Basic Certification course, which we call Combat Acting. Our next course will be a two-week intensive starting 19 January, 9am to 5pm, Monday to Friday.