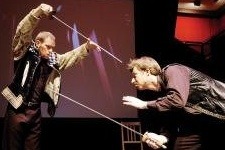 Choreography should be more than stringing together combat movements in a random order. Based on last week’s post Character in Choreography, you have some ideas how to customize your performance of a fight, but what about fight design?

I love fighting games, and you can learn a lot about fighting styles from those games that simulate real combat. However, they’re not a good way to learn choreography.

The problem with fighting games (I won’t single out titles) is that both players should feel that they are evenly matched, so the outcome is fair. When choosing a character to play, it is mainly a matter of style since the game designers spend a lot of time balancing the characters’ abilities.

This also makes the contest arbitrary. Arbitrary is no fun to watch.

These are very important questions for selecting movements one at a time, but unlike a video game, the plot of a dramatic scene should be more than an assortment of possible motions.

Like following down-down-x with forward-o, it might make a good combo that is correct for that fighter’s style, there is still no storyline to the fight. There is no plot.

The plot of the fight is composed of the events that happen within the fight scene.

When designing choreography, we need to be aware of the director’s vision:

With these simple decisions, already you should have some choreography in mind.

Length: If the fight is long, you’ll need a variety and some changes of tactics. If the fight is short, make sure that you use economy of motion but don’t sacrifice clarity.

Crisis: “War is diplomacy by other means”… or is it “Diplomacy is war by other means”? One maxim that I learned from FDC is “Fights begin when words fail.” The reason for the fight is that someone cannot achieve their ends by talking any more. Why is that? The reason should also point to how the fight will end.

If your director does not have these answers, a good fight designer should have some suggestions handy based on script analysis.

We divide choreography into phrases with short breaks in between. Different choreographers use different phrase lengths, but you should vary your phrase length to keep the audience engaged. The most important part of phrasing is that each phrase should demonstrate some plot element, not just a random series of moves.

How do you construct a story that is told entirely with combat movement? It’s not the same as dance, it is arguably easier.

Because we don’t have the nuance of language to articulate arguments and explain character feelings, we need to keep the plot fairly simple. A three step process is easy to follow yet yields satisfying results.

Please don’t misread this advice. I am not saying “Set up the fighters by showing them in a guard pose and do a few simple passes to show their style, then transition into complicated choreography, then figure out how to end it.” You’d be back to pretty much arbitrary moves again.

The set-up/complication/resolution must happen for the emotional beats of the fight.

The question “who will win?” or “will our hero survive?” do not give you any interesting events to put into your fight. Ask better questions that are emotionally relevant:

Whatever the crucial question of the fight is, you must set-up the challenge, then make it complicated or difficult, then show us the outcome. Sometimes you win the fight but lose the emotional challenge (or vice versa).

Make them wait for it!

Put a phrase break, but not for the actors to catch their breath and circle each other meaninglessly. Make them pause as one of them slowly moves to the position of greatest tension.

It doesn’t matter what you call them, who is the audience rooting for? It is very seldom that a play or movie has two equivalent people fighting. Do you really believe that half the audience is cheering for one side, and half for the other?

Make the sides of your fight as different as possible, and make a strong choice about which side the audience should be cheering for. Remember that they don’t know the outcome yet. Make them worry that it won’t turn out the way they hope.

The good guys must almost lose.

The most respected artists are those with their own vision. If you’re a fight director, look at your own life and attitudes and infuse your work with your beliefs. If you cry at stories of triumph against all odds, then make your characters suffer incredibly before winning. If you get most upset by injustice, then put moments of unfairness in your designs.

The emotional journey will be all the more genuine because you will communicate passionately with your performers, and the end result will be satisfying for you as well.