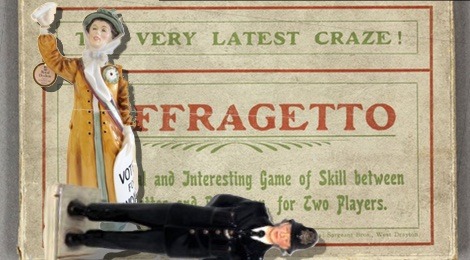 This week, we’re adding to our appreciation of Bartitsu from all angles: more fun, more science, and more people!

Tony Wolf, editor of The Bartitsu Compendium, the author of the Suffrajitsu graphic novel trilogy, manager of Bartitsu.org, and awesome guy, has converted a board game from 1909 that pits Suffragettes against Police into an online playable version. The board game itself was rediscovered by Oxford’s Bodleian Libraries which keeps the only surviving copy.

Read more, and play the game at Play Suffragetto Online! – the 1909 Suffragettes vs. Police Board Game Meets the Digital Age or download the instructions to print-and-play from Georgia Tech here: Suffragetto: Physical Feminism in Analog Game

Bartitsu red sash assistant instructor Shawn Bullock is a professional physicist and teaches at Simon Fraser University, so it’s a real boon to have his contributions in class. It’s also a great benefit to this blog that he’ll give me some feedback on my written work for you. In the last post on this blog, The Science of Bartitsu, Shawn thought that two things could have been clearer. The first concern was with Newton’s first law, the other was an addition to the pedagogy section.

I phrased Newton’s First Law as: “An object either remains at rest or continues to move at a constant velocity, unless acted upon by a net force.” Technically, all objects have net force acting on them, so the first law can be a bit confusing when articulated that way. Instead, Shawn suggests the following translation:

“An object either remains at rest or continues to move at a constant velocity, unless acted upon by an external unbalanced force.”

He thinks the phrasing is particularly useful for martial artists because it emphasizes that the change in an object’s state requires both an external (to the system) force and that said force be unbalanced. For example, a push on your shoulder does not change the motion of your body if you balance my external force with a counter force from your structural alignment. This is also where people get confused about the Third Law, when trying to apply it to systems.

Shawn is not only an educator himself, but has devoted much of his time to exploring the ways in which science has been taught historically. So his commentary on the science of pedagogy section was:

Education, or pedagogics (and andragogics) as it was called in the Victorian Era in many universities, is a social science as you suggest. I agree that the use of English terms was a deliberate move that had pedagogical import. But from what I’ve read and what you’ve said, I would also argue that a significant feature of the pedagogy of Bartitsu is an emphasis on a scientific approach to self-defence — that is, the pedagogy of encouraging students to experiment in class. This is in contrast to other martial arts that rely on what philosophers call “the authority of experience.” The latter, of course, is grounded on the principle of “I have more experience than you, I have authority, do it this way!”. Of course, we do not run our classes in the authority of instructor experience… instead we encourage students to develop authority over their own experiences via the scientific method (i.e., which tools work best for my body and physicality in given situations?).

And with that in mind, I’d like to add that many martial arts schools that do not rely on their particular “master” as a source of authority nevertheless use the authority of their founder or their centuries of history as a justification for certain practices. Barton-Wright designed Bartitsu from those aspects of Jujitsu, boxing, savate and la canne that he found most useful and that worked in concert to make his new martial art, not by combining their full gamut of moves and respecting their founders. Did you see how I appealed to our founder for that authority? It’s actually not necessary. The movements that we explore in class are self-justifying through physics and anatomy, not by saying, “that’s how we do it in our school.”

There is also a trend in forward-thinking schools and museums that the best education experience is not to listen to a lecture or read an authoritative book, but to include the student in the experience of discovery. This is especially true of martial arts and self-defence. You must be able to do it yourself and to learn from experience. As an instructor, I think of myself as a guide. I give the students suggestions on ways they should try to improve, rather than “correcting their form”. I explain why certain body positions are better to achieve a certain goal, or why another body position makes one prone to injury.

My wife is expecting our first child later this month, so I apologize if I have to miss class. Shawn will be teaching Bartitsu if I have to be absent, and on those dates when Shawn can’t make it, we have backup plans for other knowledgeable members to lead the class.

My thanks to Shawn for his addendums to the previous article and his willingness to cover me when I have to be away.