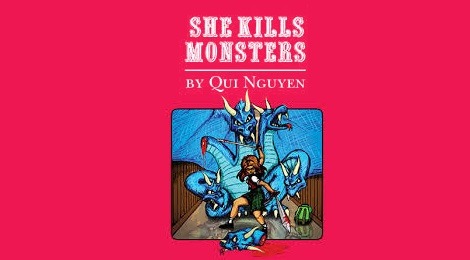 The play She Kills Monsters by Qui Nguyen is a show breathing new life into theatre. Its reliance on sword fights at important moments is making the study of stage combat more popular, and because the story focuses on two sisters, it encourages women toward action-hero roles.

Here’s the short synopsis from the publisher, Samuel French:

A comedic romp into the world of fantasy role-playing games, She Kills Monsters tells the story of Agnes Evans as she leaves her childhood home in Ohio following the death of her teenage sister, Tilly. When Agnes finds Tilly’s Dungeons & Dragons notebook, however, she stumbles into a journey of discovery and action-packed adventure in the imaginary world that was Tilly’s refuge. In this high-octane dramatic comedy laden with homicidal fairies, nasty ogres, and 90s pop culture, acclaimed young playwright Qui Nguyen offers a heart-pounding homage to the geek and warrior within us all.

There’s lots of information on the Samuel French website here: She Kills Monsters, including a map of productions, and purchasing information.

If theatre companies want to attract new audiences, this kind of play certainly has a lot of character traits working for it. Geek culture is still a strong selling point, looking at the continuing popularity of conventions that celebrate comic books, fantasy and science fiction movies, and computer games. Dungeons and Dragons is one of the progenitors of geek culture, and therefore it also plays upon the nostalgia of a certain age bracket. The fantasy setting also has violence, which is always popular in live performance when it is done well. This is true for the real fighting sports of MMA and the less real fighting entertainment of WWE and stage combat. No wonder this play has quickly spread in popularity, despite the dwindling audiences for theatre overall.

The University of Kentucky produced the play at the end of October 2016, using the fight training of SAFD fight director Andrew Dylan Ray. Here’s an article about their production, including a fun video about promoting stage combat and the play on campus: Alumnus Gives UK Theatre’s ‘She Kills Monsters’ its Fight

UNC Charlotte also produced the play shortly thereafter. It sounded like they didn’t have enough space to adequately perform the fights in this review: Geeking out with “She Kills Monsters”

Time is growing short to register for our January Fight Directors Canada course. Learn swordfighting for the stage and screen, unarmed combat including everything you need for a knock-down-drag-out brawl, and wooden staff technique for every fight that requires a bat, spear, or 2×4. Over the course of 3 weeks, you’ll be trained to a professional level of performance which you’ll prove in front of an FDC Fight Master to earn your certification. It’s the only standard recognized in Canada, so that’s what you need on your resume for the cred of a true action hero.