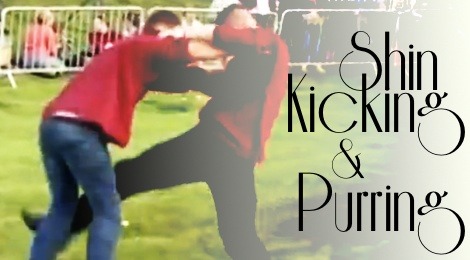 Within Bartitsu, we emphasize low kicks for self-defense. The coup de pied bas is a shin kick that is very hard to guard, partly because it is difficult to see coming.

Here’s the kung-fu version of this kick, which is almost identical to our savate method:

The low kick that has gained popularity in the mixed martial arts world is the round kick aimed for the side of the thigh or the knee. It is favoured for good reason, but there are several counters to it. Also, if you’ve watched any MMA contests, you know that many kicks can be simply absorbed or ignored due to lack of power, poor placement, or the strength of the defender’s thigh.

Here is a video about blocking or checking the low round kick from a MMA or Thai kickboxing angle:

I am not a fan of meeting shinbone with shinbone, so when attempting this counter, pay attention to using the top of the tibia just under your knee where it is thickest.

If you see a low kick initiated, you also have time to step back. The pass-back step is the most reliable reaction to any low kick. If your opponent continues with the kick, you can exploit his position, and maybe even get his back.

Shin-kicking as a sport or contest still exists in the British Isles, though as this news report points out, its origins are a mystery:

This is the description from Mashable.com:

Here’s how shin-kicking works. Two contestants fill their pant legs with straw for padding. They lock in by gripping one another by the shoulders. Then they start kicking. Whoever wimps out or falls down first loses.

Well OK then! The annual shin-kicking championships are held in Dover’s Hill, England, at something called the Cotswold Olimpicks, which just recently celebrated their 401st year of fun. A 24-year-old chap named Zak Warren took home the crown for his second consecutive year.

The Wikipedia article is short, and doesn’t detail the scoring, except that it’s usually 2 out of 3 matches to win.

Always wear shin guards when practicing these kicks, whether the target is the shin or you are kicking your partner’s thigh.

In our ongoing Bartitsu classes, we do practice Purring or shin-kicking contests with proper protective equipment.