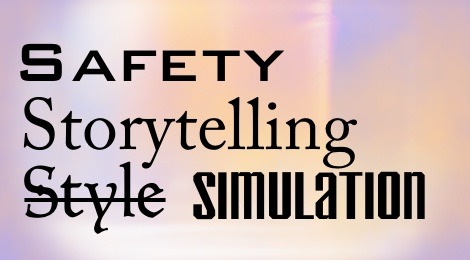 My approach to stage combat has three priorities: Safety, Simulation, and Story. This is a small but important departure from the standard Fight Directors Canada version that students will see in their glossary: safety, storytelling, and style. Here is why I believe simulation beats style and gives us a clearer understanding of what we do as actor-combatants.

We Agree on Safety and Story

First of all, I’m sure we can all agree that two of our priorities are to maximize safety and enable storytelling.

There is no doubt that the reason we do not allow performers to fight for real is for their safety. We have invented the techniques of stage combat to create fight scenes and to depict injuries and deaths on stage without putting the actor in jeopardy. It is fundamental to the art of stage combat, and when comparing two options, we tend to pick the safer version if the effect is otherwise equal to the audience… more on that later.

Perhaps some may argue that storytelling is not necessary to stage combat. A martial arts demonstration in which both fighters bow, then perform a high-speed and high-intensity choreographed fight perhaps should not be dismissed or excluded simply because the performers did not show any motivation to fight, no wounds that changed their behaviour and no indication to the audience why they should care if one side wins. Is this not a legitimate spectacle that occurs in competitions, for promotional demonstrations and to entertain in variety shows? It would be unfair to lay the priorities of the Western theatre on wushu competition and tell them that their two-person form would be “improved” if they changed their traditional practice by adding characterization.

In this clip, are we rooting for red or gold to win? What is their backstory? Why are they fighting, and what outcome does each desire?

However, the very real priority in Fight Directors Canada is the performance of fight scenes in Western theatre and in film. Therefore, although I would not want to delegitimize the very real talents of those Chinese martial artists or to exclude anyone from training for optimum safety using our methods, I do agree that storytelling is often of paramount importance to our stage combat in Canada. As much as speed, precision, measure and timing are skills to practice and develop in stage combat training, we also need to include our acting skills while fighting because it will be expected on set. The ability to show your intentions, use your breathing effectively, create believable injuries, take appropriate pauses that build tension without losing your intensity, and to direct the audience’s attention to the meaning of the fight in the larger context of the plot is not a minor addition to fight skills. It takes diligent practice and constant awareness.

Too many times, I’ve met actors in FDC certification classes who have said, “I want to focus on the moves, I’ll do the acting on test day,” and that is usually their downfall in the exam. To rehearse with the acting beats is to rehearse the scene, not merely a demonstration of martial arts.

So, the safety and storytelling, although interesting to talk about, are not the real issue.

In my view, if you already have a stage combat method that is:

What then is missing?

In my view, our third priority must be:

If that authenticity (what I call “simulation”) is missing from the movement, then the technique fails. A punch may be superbly acted, with the character seeming to lose his temper and lash out when provoked repeatedly. The victim may react in the appropriate degree, making us feel the pain in his teeth and jaw as well as his surprise and subtle humiliation. They may also be completely safe in their distance and using appropriate eye contact. The punch still fails completely if the audience can see the space between the hand and the face. The punch fails if the punch seems to aim for the forehead but the victim reacts to the jaw. The punch fails if the reaction happens a little too soon (or too late). In short, every movement in stage combat must prioritize the perception of the audience that the attack was realistic.

We can debate all day about what is “realistic,” “genuine,” “authentic,” “believable,” or “appropriate” in any martial art or theatrical context. The important priority is that the audience’s appreciation of the illusion is not shattered by disbelief. A sword cut that is too slow will not be believed, regardless of whether the performer used the perfect historical stance or the look on his face. A hair grab without bending the fingers is safe, and it may be well acted, but it cannot be believed because a genuine hair pull looks different.

The believable action can be historically accurate, especially if the character is supposed to be trained as a warrior. Conversely, we believe Shelly Duval swinging the baseball bat in the Shining not because she looks like a baseball player but precisely because she looks like she’s improvising with a weapon she’s not comfortable with.

Without a keen eye for improving the simulation, moves can fail utterly. With a focus on simulation, audiences gasp when a slap is delivered, even if the acting is mediocre.

In the FDC glossary, the trilogy of priorities is Safety, Storytelling, and Style; however, style is never well defined. In my opinion, everything that goes under the category of “style” are elements of storytelling. Should they use rapiers or smallswords? Depends on the context of the story. Do we learn to throw a round kick as used in tae kwon do or in MMA or another martial style? It should match the character’s training as a part of the story.

My argument is that storytelling involves the choices made by the actors in cooperation with the director and fight choreographer about which movements to use and when to use them. The characteristics of body mechanics that make a cut different in Italian or German longsword are just as important as the characteristics that make my injured leg move differently or my voice to waiver. The choice of style is entirely a story element.

If we choose to only prioritize the three elements of the definition in the glossary, then we’re leaving out a critical part of stage combat. We want the audience to believe in the illusion of violence. It must be safe (otherwise why do an illusion?); it must fulfill the story needs of character intention, believable character reactions (and, I argue, the style or methods a character uses), and it must not show gaps, speed changes, unreasonable targets, excessive distance between fighters, cooperative balancing, cues or any of the other aspects that we use for safety or as a performance crutch.

I believe that Simulation is not a part of Safety nor a part of Story. A safer move would take more distance, go slower or aim for targets further away from danger compared to an authentic combat movement. By this, we understand that safety and simulation exist in a kind of tension. My priority in my selection of stage combat moves are those that are highly safe and highly authentic. I teach how to punch as if in a professional boxing match, as well as a street fight because they both use the same safety elements and the same simulation elements, but different styles or storytelling elements.

Those martial artists seen above or in any number of demos of historical swordplay or cultural fighting arts are highly concerned with every move being fast and believable as fighting moves. They may sometimes sacrifice some safety to attain a greater degree of simulation by taking hits or falls from a height, but one cannot say that they are doing do for storytelling reasons.

If you’re interested in pursuing stage combat as part of a career path in acting to become an action hero or to perform in historical dramas that include fighting and dying, then don’t wait to sign up for our Fight Directors Canada certification course that begins in January. It’s 70 hours of training and rehearsal in the afternoons over the course of 3 weeks. The only certification recognized by Equity (CAEA) is only offered at Academie Duello in the province of British Columbia.