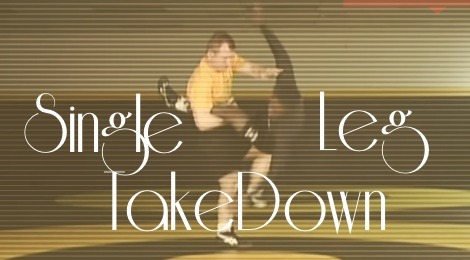 At Open Floor on Friday night, there were several attempts at single-leg takedowns, but not with a lot of success.

My main advice was to stay low and twist while driving the shoulder. The goal is not to lift the opponent, but to take them down. Picking the leg then twisting will prevent them from catching their balance, and they fall.

Here’s a version from Cary Kolat from a higher position where a lot of fighters get in trouble:

The sweep is a very jujitsu-like move, and fits well within Bartitsu. If your opponent lands face-down, you can finish by crossing his ankles in a classic control position.

If you have a few hours, go through Cary’s vast library of practical Olympic wrestling videos on YouTube. They are technical and clear, shown from different angles, and his expertise is obvious. He has other variants on the single-leg and defences when your opponent tries it.

If you keep your head on the outside, you have to be aware of the guillotine or reverse headlock. If you attempt a single-leg takedown and your opponent starts a guillotine, you need to know a few guillotine escapes for your safety.

In general, I don’t recommend the single-leg in Bartitsu, because in a self-defense situation, I’d rather not be diving towards a knee that may smash my nose in. Although illegal in wrestling, it should still be a concern.

However, in many traditions, single-leg takedowns are practiced (although not always with the sweep). For that reason it is good to be able to recognize — and be able to counter — their use.

Just keep in mind when practicing this particular maneuvre, proper setup and wise placement of your head is critical.  Also, it is recommended that you wear a mouthguard when going at speed.