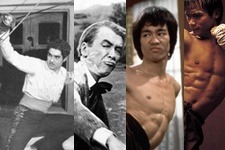 Throughout the history of cinematic fights, a variety of stunt coordinators have come to prominence, and with them their iconic styles. When a movie becomes popular and has fight scenes that are appreciated, the market is flooded with imitators.

Sometimes their style is overgeneralized to apply to every weapon. These days, if you wield two weapons, you have to do Escrima, even if those two weapons are rapiers.

Some (like me) complain about this trend, which has a long history. As I’ll show in this article, performers should be generalists, but good choreography is specific.

Swashbuckling movies began in the silent era with Douglas Fairbanks (Mark of Zorro, 1920) and later continued with Errol Flynn and others. In settings ranging from the Renaissance to the French Revolution, the use of elaborate costumes, melodrama and swordfighting were the mainstay.

In that time, the background for the fight choreographers was sport fencing. Fred Cavens was one of the earliest, credited as a “fencing instructor” for “created and staged duels” and “sword fight staging”.

Everyone in Fight Directors Canada is familiar with its founder, Paddy Crean. He trained some of the icons of the swashbuckling genre, including Errol Flynn, for whom he stunt-doubled. Later, he was the fight master at the Stratford Festival until his retirement. Like his contemporaries, he began his career as a competitive fencer.

Bob Anderson was a part of the same lineage, but slightly later. He competed in the 1952 Olympic Games for Great Britain, and later went on to become technical director of the Canadian Fencing Association. His contributions are legendary: Highlander, The Princess Bride, The Three Musketeers, The Mask of Zorro, Pirates of the Caribbean: The Curse of the Black Pearl and The Lord of the Rings film trilogy.

These sword fight choreographers are prolific and highly respected, but their excellence does not stem from training in sport fencing first. When they blindly applied sabre fencing to broadswords, it looked plain wrong. As we’ll explore, being world-class in one martial art is not required and not sufficient to make a great fight director.

It takes something more….

I believe the true birth of the movie stuntman was in the Western genre. The stand-in needed to do the risky work of falling off rooftops when shot, being dragged behind a horse, and brawling in the saloon.

The types of punches required to simulate a drunken fistfight were not high-calibre martial arts, but still needed training to sell the action to the angle of the camera. The same haymaker punches are used in film today, because they look wild and seem to pack a wallop.

But is it boxing? Not even close, but who cares?

The Western faded and Hollywood films in the 1970s no longer featured a lot of personal combat. Police stories, war movies and revenge fantasies were dominated by guns, car chases and explosions. When punches were thrown, they still fell back on their Western roots. Spy movies like the James Bond franchise sometimes included hand to hand combat that looked more technical and had its roots in military training in England and America, but most would agree that the choreography was neither technically complicated nor concerned with recreating authentic martial arts.

In the 80’s, white dudes tried their hand at it with mixed success. Jean-Claude Van Damme and Steven Seagal became household names, while films like Gymkata, American Ninja and Perfect Weapon did nothing for their stars. After a resurgence of cop movies, martial arts movies came back again and continue to this day with Jackie Chan, Jet Li, Donnie Yen and others.

Many of the most versatile performers were trained by the Beijing Opera from a young age and use either Wushu, the nationalized martial art of China, or a fusion of different styles, so they can do anything. When wires are attached to the performer for flying kicks and spinning reactions, it’s called “Hong Kong wire work”, which exploded into Hollywood with Crouching Tiger, Hidden Dragon and the Matrix.

Which martial art are they doing? Um….

As a professional fight choreographer, I am often asked, “What martial art is shown in [insert movie]?” In many cases, the answer is disappointing: it’s stage combat showing a fusion of skills, many of which are impossible, impractical but flashy, or common to almost every unarmed art.

On the other hand, some films take great pains to represent a genuine martial art, and they showcase a lead actor who is a champion in that art. Steven Seagal is a black belt in Aikido, and his best films have the most Aikido in them. Recently, The Raid and its sequel used Silat, and their unique movement patters were captivating. Tony Jaa used Muai Thai in the film Ong Bak and became famous for it.

An actor should not necessarily take on the quest to be a world champion in a little-known martial art just for the opportunity to star in the movie that will bring it to prominence. A better path is to develop body control and body awareness through a study of several martial arts, and an understanding of the illusion of violence by practicing stage combat.

Then, the action-hero can take the direction of a fight choreographer to replicate any martial art. Donnie Yen, for example, played the founder of modern Wing Chun, Ip Man, even though he wasn’t trained specifically in that art before the film.

Sherlock Holmes should be using Bartitsu in fights, so Robert Downey, Jr. modified his Wing Chun training under the direction of Richard Ryan who is ‘Master-at-Arms’ to the Royal Academy of Dramatic Art (RADA). Purists will scrutinize every motion and say “that’s not really Bartitsu,” but at least they’re trying for authenticity.

Remember that performance of a martial art is not the same as choreographing a fight scene. Learning how a weapon was actually used in historical context lends legitimacy to choreography. After all, the old manuscripts were records of best practices that had evolved through use by generations of men who actually lived or died by its effectiveness. Be careful not to shoe-horn what you practice in your studio into every fight.

A Scottish basket-hilt, a rapier and a sabre are all one-handed swords, but none of them are used like an escrima stick.

If you’re a performer, you need to incorporate notes from your fight director, not to correct them from your years of legitimate martial arts training. Their directorial role is to tell you what looks best through the lens of the camera. Having mastery over the minute details of your motion is more important than drilling one particular action for speed or accuracy to a specific martial art. Learn how to dance.

The authenticity we’re really after is an expression of your character: a real person who is in a stressful physical conflict might not do the perfect move. Make your audience believe that your effort is genuine, and fueled by rage or fear or sadistic joy. That’s emotional authenticity.

However, the emotion shouldn’t prevent you from obeying your choreographer.

The road to putting together good fight choreography is not instant. You will be working under a fight director, and probably with one or more actors or stunt doubles, and the quality of the fight will be affected by the depth of the vision that you all share. As noted earlier, good choreography has a specific outcome that everyone in the production is pooling their combined training and research to achieve. Having a shared fundamental understanding of industry-level terminology and technique is therefore essential, and part of the reason why certification programs such as that offered through Fight Directors of Canada exist.

If you want your choreography to be a success, your process should look something like this:

If you are interested in being guided through the stages of developing fight choreography as a performer, Academie Duello offers the Fight Directors Canada Basic Actor-Combatant certification course, which will give you an excellent springboard for performance. Classes will run Monday to Friday, 9am to 5pm, from January 19-30. In this course, you’ll learn the illusion of violence with sword, quarterstaff and unarmed fighting that you can apply to different styles and situations. No previous experience in martial arts is necessary, but a serious attitude towards the craft of acting is expected.