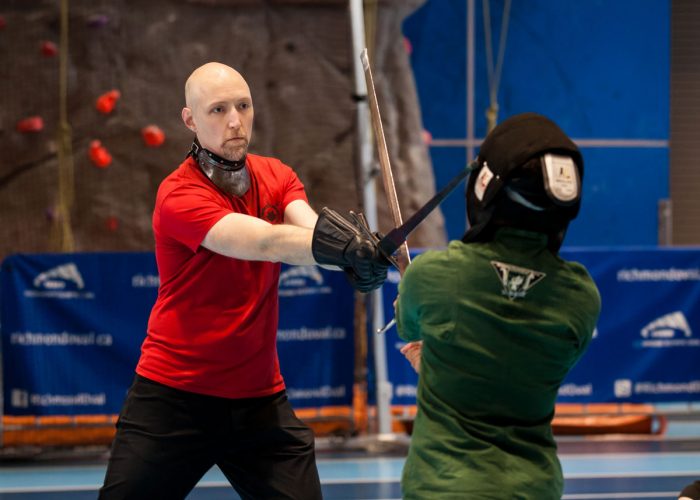 Well it’s been nearly a month since the Vancouver International Swordplay Symposium (VISS) took place at the Richmond Oval and I’m finally free to write a bit about what happened and how it went!

This was our fifth bi-annual event and each time it comes around it provides new adventures and opportunities for both its organizers and its students.

For me it took a bit of time to decompress from the weekend as I was both the events organizer and a teacher, then a short week after the event I found myself teaching a 50-hour level 2 instructor intensive so it didn’t leave much time for catch up in between.

I’ve now emerged from both of those things and am happy to be here to share some of my thoughts and recollections from what was an amazing weekend of interaction between instructors and students of swordplay.

Doubling Down on the Theme

The Theme of the previous VISS in 2017 was This vs That: An Exploration of Martial Contrast. In that theme we took different approaches to weapon disciplines (like rapier, and sword and buckler) and made tracks that placed one 9-hour intensive before another on the same discipline but with a different teacher and system. That gave us Spanish Rapier vs Italian Rapier, German Longsword vs Italian Longsword, etc.

This year we took a deeper dive with “This vs This”. The goal was to compare disciplines or approaches within the same system or discipline. We actually ended up with a fair bit more diversity as my planning partner, Michael Heveran, and I explored the potential match-ups. This year our intensive track pairs were:

Comments I received from students suggested that they really enjoyed these tracks and how they blended and contrasted from one another. At a typical conference, it can be challenging to figure out how to incorporate a ton of divergent topics into your training. This format, and the closeness of each topic to the other, made it much easier to focus and make some meaningful progress in the training of the attendees.

The last day of the event featured combined workshops that sought to bring together both intensive workshop tracks into a single joint exploration. My session with Greg Mele brought together the teachings of Vadi and Fiore and was superbly fun to teach. I enjoyed the way we were able to weave together the teachings of these two historical masters into a cohesive historical and tactical narrative.

I managed to poke my head in on nearly every other intensive (using some of my class breaks judiciously). Instructors also gave each other a preview at a special pre-instructor event. Some things that stood out to me:

Ellis shared very interesting ideas on power generation, especially at close ranges. It’s important when suppressing an armed opponent in ground wrestling to not be making big wind-ups or extension of the body. He showed how you could keep proximal while still extending the powerful muscles of the chest and back to strike.

I also enjoyed how he used kata (martial forms) from his practice as starting places for tactical drills. You would learn a particular kata or scenario and then with your partner practice breaking it at various points to innovate into a completely different action that shared some of the same intent.

Marco brought a very parallel ferocity and practicality to his exploration of Italian grappling. Marco always does an amazing job of bringing together both the technical aspects of his art as well as the internal and psychological approach required to be a warrior. This year was no exception with his workshops being challenging and invigorating both physically and toward the warrior attitude.

John and Reinier ran as a tight team and seemed to compliment each other well with John working rigorously into body and blade mechanics and Reinier diving into more practical and tactical exercises. Their final session on “proceeding” (a way of approaching fencing where you move forward without stopping) had them alternating back and forth between the various “rules” of this approach. Students of the workshops shared with me that they really enjoyed both the level of technical detail expressed by the teachers but also the drills that allowed them to practice in a way that made them feel they acquired enough proficiency to take the exercises and techniques home.

I didn’t get to see much of Christian and Bill’s groups but I did get to watch their fight at the Saturday Night gala where they took Messer up against Longsword. A pleasure to watch as two superb fencers brought their systems to bear and managed to overcome the reach disadvantage of the messer effectively.

A big thank you to all of our VISS intensive instructors. You all did a tremendous job of creating rich and entertaining programs for a diverse group of students!

In addition to the intensives, each day of VISS featured several elective workshops or lectures. These were one-off sessions on a variety of topics including:

A few of these sessions were the highlight of the event for many attendees. I heard particularly good things about Mike Panian’s workshop on overcoming fear, Jennifer Landel’s workshop on training women and men, and Tricia and Louie’s crash course into Filipino Martial Arts.

On the Saturday there was a particularly special lunch time lecture that involved Greg Mele, Christian Tobler, Jherek Swanger, and Reinier Van Noort (moderated by Michael Heveran) that delved into the intricacies of translation and interpretation. It was fantastic to listen to stories from these veteran translators about their own challenges, pitfalls, and triumphs as they worked to make accessible translations for some of the most popular HEMA books we all read today.

A highlight of VISS every year is the Saturday night gala. This year Leah Alfred did an amazing job as our gala organizer of putting together an amazing night with spectacular decorations, fun games, great music, and an awesome lineup of exhibition bouts between VISS instructors.

One of the things that I love most about VISS is the tremendous community that it attracts from all over North America and the world. These are people who are interested in forwarding their practice, being excellent students, and creating a safe and fun environment for everyone. There are no egos and a tremendous amount of camaraderie.

Thanks everyone for making this year yet another excellent year to attend, instruct, and organize!

Now, some exciting news! We’re moving VISS from the odd numbered years to the even numbered ones. That means the next VISS isn’t two years away, it’s one! The dates for VISS 2020 are soon to be announced.