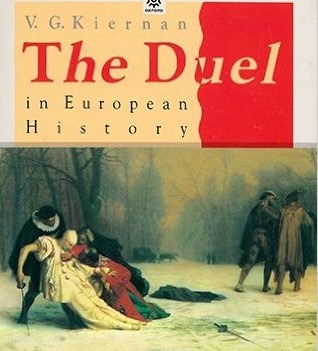 “Every society has needed licensed channels for the overflow of destructive impulses.  Duelling reduced such feuds to symbolic proportions, confined them to individuals, and required only a limited number of victims”. [1]

In The Duel in European History, Marxist social-historian Kiernan offers us a wide variety of duelling stories and a distinct social theory about this pugnacious habit. The retrospective reaches back to the concept’s medieval origins, carries through to its 18th century heyday, and concludes with the decline of the duel after World War One… when there was nobody left to fight them.  Tracing the role of duelling within the military, the social classes, and religion, the author leads us — slowly and heavily — to his conclusion that the longevity of duelling was a last-gasp effort by increasingly marginalised and irrelevant western aristocratic classes (and their middle-class wannabes) to maintain their privileged position atop a social and legal pyramid.

For the first couple of chapters, Kiernan goes through great lengths to convince us that duelling is “un natural [sic] and malign” and that it was unique to European upper classes.  The “right of duel” was cherished by privileged minorities, even though the concept of “truth by trial” was being overtaken (at least for the lower classes) by the influences of judges and lawyers.

Humanity in general is described as inherently self-destructive; Kiernan puts forward the theory that duelling elevated social conflict to an absurd level.  Duelling was naught but ritualised and witnessed murder!

The author’s added political and social slant to his selected examples notwithstanding, the book has value to the modern duellist interested in how the duelling discipline developed from its origins to modern times.  (It appears that the apogee of European sword duelling was the period from 1640-1760, with some modest deviations depending on the country involved.)  Italy, France, Prussia, England and a great chunk of central Europe are all assessed as to why duelling took the unique national forms that it did within very small and distinct geographic areas and social classes.

Kiernan was very much a respected and prolific academic in the UK, but an expertise in Marxist historiography does not a swordsman make.  ‘Tis doubtful that the author ever handled a sword with someone that could explain to him the complexities and realities of what he had in hand:

“It was between 1550 and 1650 that the greatest variety of weapons was in use.  Pride of place went to the rapier, evolving mainly in Italy and Spain, a fairly long and cumbrous sword calling for strength as well as skill.  Its slowness must have helped to make feasible the complicated moves and passes devised by the experts.” [2, emphasis added]

For those of us familiar with the rapier and its speed, this will seem somewhat bizarre. There are, obviously, no technical or combat details in Kiernan’s text with which we can improve our art.

In conclusion, Kiernan has written an… adequate book for our specific audience, if one is researching the details on how European society embraced and ultimately rejected the concept of two men (or women) “taking their disagreement outside”.  However, one must be respectfully wary of Kiernan’s constantly hammered opinion that the swordplay duel through most of history is nothing more than folklore, the misappropriated use of the concept of honour as a tool to serve the needs of those with the most to lose from social change… at any period in history.

Quotes out of context include: