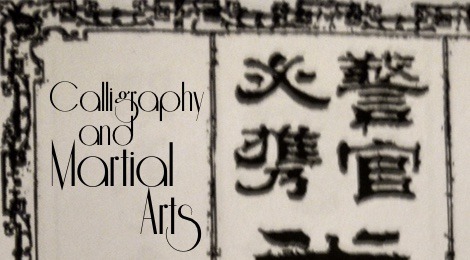 This week, I’m jotting down some rumination on the connection between writing and martial arts, so I don’t have a thesis or a lesson to teach, but the reader can follow my musing toward their own meditation on the topic.

I’m partially inspired by Major Wes who sent me a copy of the book on Kenpo discussed in my post on Japanese Police Bartitsu. The translation includes the original pages, written in Chinese and Japanese as well as copious illustrations. However, I’m not going to talk about the challenges of describing martial arts or other movements in writing or pictures, which is its own topic. I want to explore the practice of writing itself.

The similarity between calligraphy and martial arts has been noted throughout history in China and Japan.

Chinese swordplay is connected to calligraphy in this scene from the beautiful film Hero (2002):

Japanese samurai training included arts as well as combat. Shodo, or the Way of Calligraphy, is one of the arts in traditional Japanese education. Here is a short but very informative article from the Shudokan Martial Arts Association: Budo and the Art of Japanese Calligraphy.

As the article explains, the artist’s energy is expressed through the brush as a swordsman’s is expressed through the weapon. They are both expressions of the mind and aim towards a perfection of bodily motion, from the grip of an object to the execution of the movement with the necessary flow and speed to achieve the result. One mistake in calligraphy and the scroll must be thrown away; the ink is black and permanent. So too, one mistake in a fight, and the samurai will die.

Diligent practice is required for both fighting and writing. Try to improve your handwriting today. You’ll have to do a little free writing and then look carefully for letters and combinations of letters that are illegible or inelegant. You’ll also find that it is not merely a matter of observing or understanding the fault — instead, it will take a page or more of repeated practice of just that letter to see any improvement. If you don’t pay attention to that letter every day and keep practicing it, it will regress into the habitual way you used to make it. Soon, after diligent practice, you won’t need to think about it any more, as the new lettering will be your natural way of forming the troublesome letter. You may not even notice your improvement, but someone else might compliment you on your handwriting.

What are the characteristics of good handwriting?

Think about how your handwriting reflects who you are. Then, apply it to your combat practice in the same way.