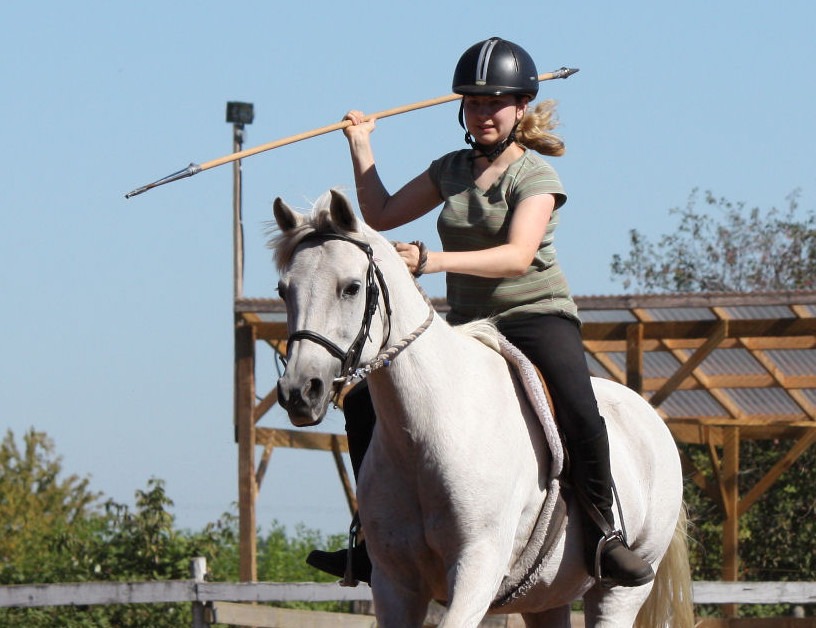 Blue Spur: Throwing a Spear from the Saddle

The final Mounted Games item in the Blue Spear checklist is:

Safely throw a javelin from the halt and walk without emphasis on accuracy.

Since we don’t even ask you to hit a target, this is, (in a sense) even easier than the earlier requirement of hitting a target from the ground.  There is also not much I can add to my recomendations from November.  So review that post with the following extra caveats.

Although the mechanics of your throw are hampered somewhat by your motionless legs, velocity is increased by the speed of your horse, and a well-thrown spear from a galloping horse has impressive power.  Once you have mastered the throw from a standstill and are consistently accurate you can beginning throwing from a moving horse at increasing gaits.

The blog will take a break till January, when I’ll return with the last item of the Blue Spur checklist, Xenophon, before beginning with Red Spur material.  Merry Christmas and Happy New Year to all!

Classes have been scheduled to begin at the end of January.  Riding and Horsemanship classes begin January 31st, and Mounted Combat classes start the following week, February 7th.  We will start the year with a Mounted Combat playday on January 31st as well.  All classes take place at Red Colt Co-op, 12320 No 2 Road, in Richmond.