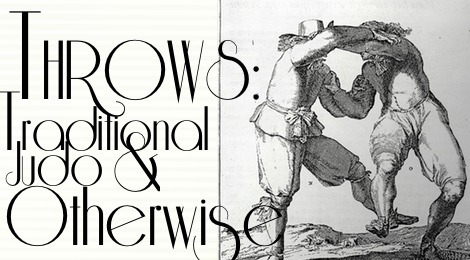 The traditional throws of Judo and Jujitsu are covered in many sources online. Although in Bartitsu class we never use the Japanese terms, we perform many of these throws.

As an evolving mixed martial art for self-defense, Neo-Bartitsu also borrows from other traditions for the best combination of techniques, especially in the tricky realm of take-downs.

This old film reel was posted on Bartitsu.org by Tony. Visit his blog to learn more about it.

Although traditional jujitsu is the basis of Bartitsu, judo is closely related.

The root of both words is “ju” which means “soft” or “gentle”, and in this case it refers to the opposite of strikes and kicks. The suffix “-jitsu” or “-jutsu” means “art”, while “-do” means “way, path”. So jujitsu means “art of softness” while judo means “way of gentleness”. The distinction is often to distinguish the sport form from the martial art form. For example, Kendo is the sword-fighting sport in Japan, while Kenjutsu is a family of sword arts. As you may have guessed, “ken” means “sword”.

The link below is an excellent matrix of the traditional judo throws. The illustrations help you understand the body position for the essential motion, and each is linked to a video demonstration.

Take a look at these in particular:

Jujitsu is the foundation of Judo and of Bartitsu. Although we’re looking at the Traditional 40 Judo Throws, they originated with Jujitsu, and it’s better to think of them in that context than in the sporting sense.

Sambo is essentially the Russian form of Judo, and the elements that set it apart are mostly flying take-downs which are not appropriate to integrate into neo-bartitsu. However, if you want to watch incredible sacrifice throws, search Sambo videos.

Aikido is another Japanese art that focuses on takedowns and throws. The system is elegant, but the core motions are different from Bartitsu movement, and don’t integrate well with other techniques.

Silat is a large and diverse group of Indonesian fighting arts, some armed and some empty-hand. Many forms of silat include excellent and practical take downs which we incorporate. I find Silat to be very close to Bartitsu in many ways.

Abrazzare is the medieval wrestling that we practice at Duello. I am not an instructor in that art, but we do share many techniques and concepts, so I may be taking on some teaching there some time. We want students to be able to cross-train in the medieval arts and Bartitsu if that interests them, and not use two completely different systems.

This Saturday’s class will focus on a few versions of the sacrifice throw. My students should review those sections on judo.info above.

The following Saturday, 6 April, will be an Introduction to Bartitsu: Fight Like Sherlock Holmes workshop, in which we’ll learn only the easiest throws, because we also spend time with all the other components: locks, strikes, kicking and of course, the stick fighting. Sign up at AcademieDuello.com as always.