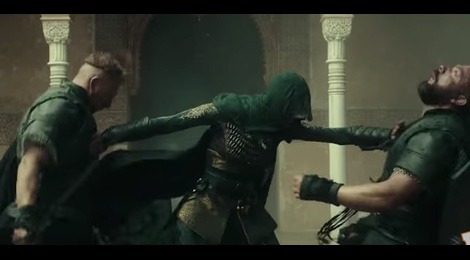 Okay. This is Michael Fassbender and Marion Cotillard in the movie adaptation of Assassin’s Creed. Let’s do this.

Is that the story of Assassin’s Creed? Also, why’s he running around? Also… I don’t understand anything that happened there.

Has There Been a Good Videogame Movie?

A comprehensive list of movies based on video games can be found on Wikipedia with their Rotten Tomatoes ratings and Metacritic scores:

The star-power will probably not raise its score above the norm. Movie studios know they need at least one big star to even green-light a video game movie. This list includes:

If you want to see this pair in a good movie, check out Macbeth (2015); it has a Rotten Tomatoes score of 79%. I talked about it in a previous article: Trailer Ricochet: Macbeth. Besides, you should watch as much Shakespeare as you can if you want to perform stage combat. The overly CG fights in Assassin’s Creed will not be as much use to you.

The big question for PlayFighting is: what can we tell about the action scenes we can expect from this movie?

Literally half the trailer, about 1 minute, tells the framing narrative of the Animus and tells the audience about the simulated nature of the story. The game trailers leave this out almost entirely, so it’s a surprise to the player. In the case of the games, all of the marketing material focuses on the historical story, with the fighting, sneaking and parkour. Is that a better strategy? It’s certainly more colourful than grey rooms.

When we finally get to the “gameplay”, we’ve got some promising multiple-opponent fights with different weapons that look fun. That’s marred a bit for me by the wu-shu flips and kicks. When flips and kicks are used in a Euorpean period piece, my mind always jumps to The Three Musketeers (2011).

So I just rewatched that trailer. It’s also not a great movie (since we’re talking about Rotten Tomatoes, it’s got a 24%). If you like the flips and slow motion stuff combined with European swords, enjoy this instead of going to the new Assassin’s Creed:

Back to the action in the trailer in question. Obviously, when your title includes the word “Assassin”, you’re going to expect some killings. The stunt coordinator is Ben Cooke, known for his work on Casino Royale (2006) and Batman Begins (2005). So that’s a good sign. But the more I think about it, the more I expect Assassin’s Creed to follow the shape of the Three Musketeers in pace and quality. One has airships, the other has disconnecting from the Matrix. Choose your favourite jarring discontinuity.

You Could Play the Game Instead

Below is the cinematic trailer for the latest Assassin’s Creed game (IV), so it’s not the version that the film is based on. I daresay it will offer more entertainment than the movie.