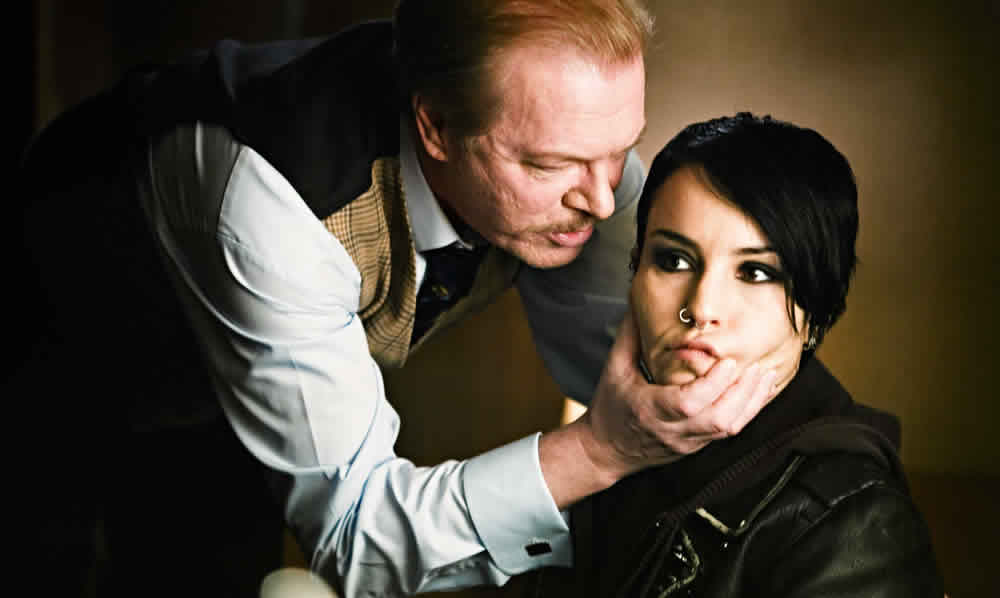 Another episode of our stage combat feature: action movie trailers. What we’re looking forward to and why.

You may have noticed the text in there: From the Director of the Original The Girl With The Dragon Tattoo. That’s what we’re going to talk about today: Niels Arden Oplev.

Based on a novel called “Men Who Hate Women” by the late Swedish author Steig Larson. The novel and the film adaptation are troubling to say the least. The protagonist, Lisbet, is a resilient and brilliant computer hacker who has endured many forms of abuse and misfortune in her young life. She is enlisted by a disgraced reporter, Mikael Blomkvist, to uncover the mystery of the disappearance and probable murder of a billionaire. In bleak Sweden on an isolated island, they track down the serial killer.

Some point to Lisbet as a strong female protagonist and take her journey as a pragmatic feminist commentary (Maureen Corrigan,2008). Others see the inherent corruption that underlies the whole story as an argument that we should just accept and live with a neoliberal world order that is delocalized, dehumanized and misogynistic.

The film has some notable violent sequences, which I applaud because they were paced and shot to be disturbing. If that’s not your thing, don’t watch this movie. On the other hand, if you want to learn how to make violence really resonate, study this director.

The Girl Who Played With Fire and The Girl Who Kicked the Hornet’s Nest are irrelevant to our discussion here. The reason we’re talking about Dragon Tattoo is because of the director, Niels Arden Oplev. The sequels were directed by Daniel Alfredson, so they don’t reflect on Dead Man Down.

Largely irrelevant for the same reason: the remake directed by David Fincher. If you only saw the American one, you’ve got to see the original, even if you’ll miss Daniel Craig.

I don’t see much hand-to-hand in the trailer. I’m expecting a lot of gunplay, and some explosions, and I have a feeling this trailer reveals most of the violence of the film.

If Dragon Tattoo is a guide, perhaps there is some creepy torture that leaves Noomi Rapace’s character scarred. I don’t expect to see the scene in which she sustains the wounds, but I wouldn’t be surprised by a flashback sequence involving screaming. But the techniques of those scenarios aren’t the type of violence that we as fight performers need to study. But as actors, the ability to portray those intentions, fears and pain can be a good exercise.

To be honest, this looks like a tame story of revenge without too much at stake for the audience. Who can relate organized crime with automatic weapons and explosions large enough to take down a building?

Then again, the trailer for the original Girl With The Dragon Tatoo didn’t really reveal the horror of the movie either.

And if you want to see a good version of classic Shakespeare, check out this one with Sam Worthington:

If this trailer didn’t mention Niels Arden Oplev, I wouldn’t think about it. Even so, I’m not sure if I’ll see it in the theatre or wait for video. Let’s hear the early reviews, it may surprise.