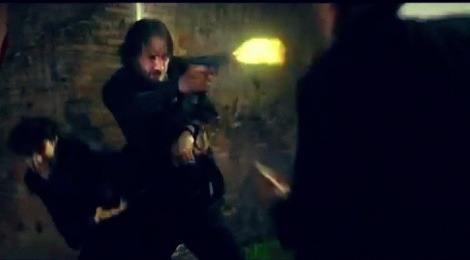 I was reluctant to see John Wick (2014) because I didn’t think the story of an unstoppable gun-toting Keanu Reeves seeking revenge for his puppy would be entertaining. Boy, was I right. But what the story lacks in… story… it makes up for with action. The gun-fu as performed by Reeves is exceptional. And now, the trailer for the sequel promises more of the same (but in Rome):

If you need a reminder of the first “chapter” of Wick, here’s the trailer for comparison:

In the main, I feel confident that Chapter 2 will not depart from the choices made in the original. The writer is the same from the first movie, Derek Kolstad. His only other feature-length movie is The Package (2013), a Steve Austin/Dolf Lundgren vehicle with a lot of machine guns. The dialogue features scintillating exchanges like:
“You killed him with one hit!”
“Yeah, it sucks to be him.”

The best thing about the first John Wick is that the director, Chad Stahelski, is a long time stunt coordinator. He even stunt-doubled for Keanu Reeves more than once. He knows how to set up action sequences, and the kind of attention that fight scenes need. Although John Wick was his first time in the Director’s chair, he has been a second-unit director (which is the department that shoots action scenes in big-budget films) for Sherlock Holmes: A Game of Shadows (2011), The Hunger Games (2012), The Expendables 2 (2012), and between “Wicks”, he’s been busy as second unit director on Captain America: Civil War (2016). In short, he knows his action scenes.

One of my big problems with the artistic choices in John Wick was the heavy reliance on the orange-teal colour scheme. This was mainly what we call colour grading which is part of the editing process after the film was shot. Here’s the authoritative article on the origin of this trend and why it’s popular by Priceonomics: Why Every Movie Looks Sort of Orange and Blue. Fortunately, the new movie’s trailer shows more colours than the original, so I’m expecting that the filmmakers have given me one less thing to criticize.

But there is one other thing I’m worried about: the final villain. It looks like this time it will be a teenager and there’s a tiny clip of him fighting. So, I assume that the biggest challenge to our hero will be someone half his weight, not the professional killers he dispatches by the dozens. This was a problem in the first film…

… in which the final fight was against the underworld kingpin who was clearly 20 years his senior, out of shape and unarmed. It was the final insult to my suspension of disbelief that left me unimpressed by the film overall, especially as regards the writing. The hero does not need to physically fight the villain.

As soon as I saw Lawrence Fishburne in the trailer, all I could think of was: “I know kung fu.”

They’re even on a rooftop, calling back to the scene in the Matrix that immediately follows that fight. Will they fight? I doubt it.

Naturally, it wouldn’t be John Wick without plenty of handguns combined with the judo/jujitsu/sambo style that made the first John Wick so much fun.

I’m also looking forward to the subway fight because fights in close-quarters are always interesting (for example, in the Bourne Ultimatum), which is augmented by the vertical handrails and the fixed arrangement of seats. Here’s a scene from the movie Ninja (2009): https://www.youtube.com/watch?v=1ut7vFQh46E. There’s also subway fight in The Raid 2 (2014), but as I’ve warned my students previously, don’t watch that movie unless you’re prepared for horror dressed up as action.

There will be a fight through some sort of catacomb or sewer involving a light machine gun or “assault rifle.” Though, I’m not such a gun aficionado to identify it by its silhouette. It takes up a longer time in the trailer than the other fight clips, but hopefully that does not reflect the length in the final cut of the movie.

I’ll see this Chapter of John Wick with more enthusiasm than I entered the first installment.But, I won’t be expecting much from the plot, characters or dialogue. If this does turn out to be a trilogy as expected, I would be happiest if they kept the entire team the same, but get a new writer for the finale.